Through our organic farming program, community members can learn new sustainable techniques that benefit both the people and the forest that surrounds them

Community members often participate in our environmental awareness campaigns, increasing the impact of our work

Community members hold up a sign for World Orangutan Day. 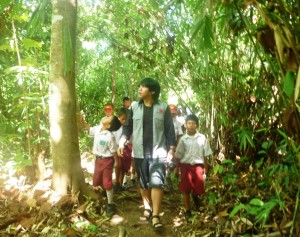 The Gunung Palung Orangutan Conservation Program (GPOCP) grew out of the larger Gunung Palung Orangutan Project in response to the growing threat that human activities posed to orangutans and other wildlife in and around Gunung Palung National Park (GPNP). GPOCP began in 1999 and was registered as a non-profit organization in Indonesia in 2000, under the name Yayasan Palung. In 2008 GPOCP became a registered non-profit in the United States. Over the years, GPOCP has progressively evolved into a landscape level conservation organization, striving for the protection of GPNP and the surrounding ecological areas as a whole. We currently run five main conservation programs, all with the goal of protecting the orangutan population in the GPNP area. We also work closely with the scientific research team, who are based at the Cabang Panti research station in the heart of GPNP. Our five conservation programs are:

Since 2002, GPOCP has closely collaborated with the National Park authorities toward stopping large-scale illegal logging within the National Park. Years of environmental awareness have shaped a strong network of conservation advocates among government officials and civil society throughout the region. Our customary forest and alternative livelihoods initiative has been praised by the communities surrounding GPNP, and helped reduce the encroachment inside the National Park. Furthermore, our collaboration with other NGOs and institutions creates solidarity amongst conservation professionals in the area. This collaborative effort was highlighted by the leading role GPOCP played in the networking and collaboration of Indonesian government authorities, along with multiple NGOs, that led to the arrest of an orangutan trader in Pontianak in 2010, resulting in the first successful orangutan-related prosecution in Indonesia. We are continuously reaching more people with our education and awareness programs, expanding into new villages, and steadily working toward our goal of conserving the wild orangutan population in and around Gunung Palung National Park.