Orangutans are the only great apes found outside of Africa, and understanding their evolutionary history is very important to anthropologists and primatologists. The word orangutan comes from the Malaysian/Indonesian words orang and hutan, which translate to “person” and “forest”—orangutans are literally the people of the forest! Today, orangutans are only found in Indonesia and Malaysia, specifically on the islands of Borneo and Sumatra. During the Pleistocene Era they were more widespread across Southeast Asia and some scientists believe they ranged all the way up into southern China. 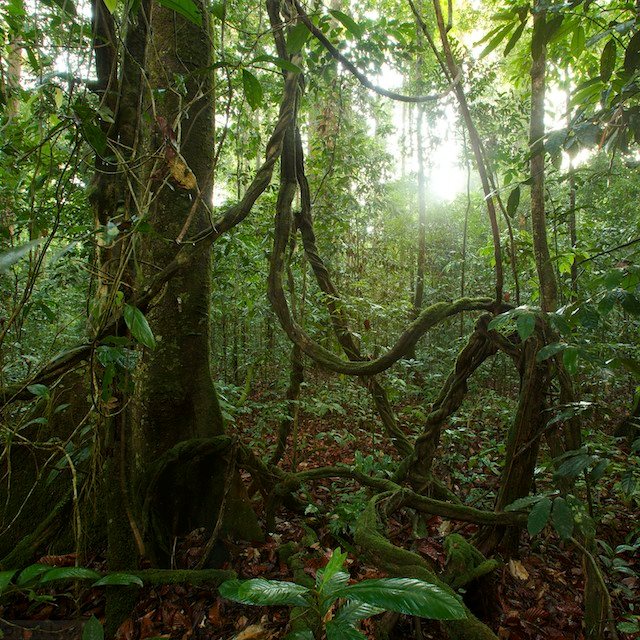 Orangutans live in rain forest habitats ranging from sea-level swamp forests to mountain slopes (generally up to approximately 1200 meters above sea level). These forests are true wet rain forests with average rainfall ranging from slightly over 2000 mm per year to 4500 mm per year. One of the principal orangutan habitats is lowland peat swamp forest, which has relatively small trees and nutrient-poor soil, but is home to some of the orangutans’ favorite food species. They also prefer Dipterocarp forest- that is, forest dominated by the large trees of the Dipterocarpaceae family. This type of forest is characterized by “mast fruitings,” a phenomenon that occurs approximately every 2-10 years in which up to 88% of rain forest tree species may fruit at the same time. This causes dramatic fluctuations in the type and quantity of fruit available to orangutans: food is abundant during mast fruiting events, but there are also long stretches where food availability is very low. This resource unpredictability may help researchers explain many of the unique aspects of orangutan physiology and behavior. Across study sites, researchers have found that orangutan population density is positively correlated with fruit availability. 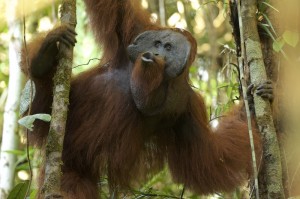 Orangutans are the largest of all canopy animals, with wild adult males weighing 86.3 kg on average and females 38.5 kg. Such large animals move through the canopy by quadrumanual clambering (using all four hands and feet to grasp and pull themselves along) and occasional brachiation. They also effectively use their body weight to bend and sway small trees, using the stored momentum in the tree as a spring to propel themselves across a gap until they can grasp an adjacent branch.

Female orangutans are less than half the size (approximately 45%) of developed adult males, which makes orangutans the most sexually dimorphic of all the great apes. Factors such as male-male competition, female choice, and sexual coercion may have been important in the evolution of large male body size in orangutans. Female orangutans are considered to be the ecological sex, that is, to exhibit a body size that is primarily constrained by nutritional factors rather than competition.

Adult male orangutans come in two morphologically distinct types, an unusual phenomenon known as bimaturism. Dominant males are characterized by their enormous size (over 80 kg), large cheek pads (called flanges), prominent throat sacs, and ability to generate loud vocalizations, known as “long calls,” that are audible to humans up to 800 m away. The second type of male is just half the size of a flanged male, lacks the cheek pads and throat sac, and cannot produce long calls. Although these individuals were originally thought to be subadult males, they are just as capable of siring offspring as the dominant males are.

Orangutan activity patterns vary depending on food availability, social conditions, and reproductive status. On average, orangutans spend approximately 44% of their time resting, 41% feeding, 13% traveling, 2% nest building, and less than 1% engaging in other activities, such as fighting, mating, and socializing. Because orangutans are primarily solitary, their activity patterns may be very individualistic.  However, general patterns have emerged from the data collected at long-term study sites: non-sexually active females feed the most and rest the least, flanged males favor resting over feeding or traveling, and unflanged males travel the most. 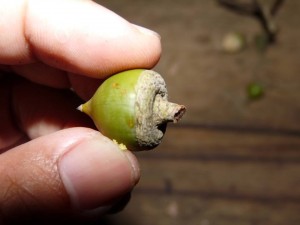 Fruit of the genus Lithocarpus- although they don’t look like much, orangutans love these tasty acorn-like fruits!

Bornean and Sumatran forests are dominated by trees in the Dipterocarpaceae family that periodically experience a mast fruiting in which up to 88% of the trees of this and other plant families flower and fruit in synchrony. Mast fruiting occurs every 2-10 years, appears to be driven by climatic events associated with the EI Niño weather pattern, and is often followed by periods of extremely low fruit availability. Peat swamps are less subject to mast fruiting because of lower dipterocarp density, but fruit availability is still variable. Orangutans feed on twice as many plant genera as other great apes, and the orangutan diet varies dramatically depending on what foods are available. Fruit, both pulp and seeds, is the preferred food of orangutans. Orangutans prefer to feed in trees with large patches of fruit when it is available. Adult males have longer feeding bouts than do females, and males tend to feed in fewer food patches per day than do females. When fruit is abundant, such as during a mast fruiting, the orangutan diet may consist of 100% fruit. However, during fruit-poor times, orangutans must rely on more abundant but relatively lower quality food, such as bark, leaves, pithy plants, and insects. Orangutans have been seen to eat meat only on rare occasions. In Sumatra, three adult females have been observed on seven occasions to hunt and eat slow lorises, and one female was observed eating a gibbon.  At Gunung Palung, a juvenile female orangutan was once observed catching and eating a rat.

Orangutans are primarily solitary animals. This is likely due to the fact that feeding competition can be quite intense in times when food is scarce. A mother and her dependent offspring may travel with an older daughter and her offspring, and sometimes sexually receptive females travel in coordination with a male for several hours, days or weeks, a relationship known as a consortship. Generally, however, orangutans live solitary lives, rarely coming into contact with other orangutans. For example, female home ranges at Gunung Palung overlap by 67.8%, but data indicate that these females favor the core of their range and in actuality there is minimal (13.4%) overlap between their ranges. Both flanged and unflanged males have significantly larger home ranges than females, covering at least 2,500 ha. Flanged male home ranges are three to five times the size of female home ranges, allowing them to overlap with multiple females. Flanged males are more tolerant of unflanged males in their proximity than other flanged males. These males use long calls to communicate their position, and individual long calls show clear acoustic differences that can be identified up to 300 m away. However, the primary function of the long call is to attract females. 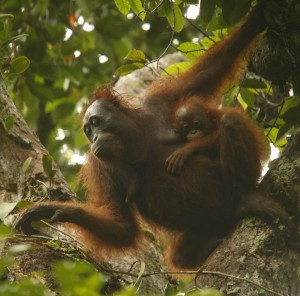 Females reach sexual maturity at approximately 11-15 years in the wild, although maturation can occur as early as 7-9 years in captivity. Sexual maturation in males ranges broadly. Males have been known to father offspring as early as 6.5 years in captivity. The transition from an adolescent to an undeveloped adult male stage occurs at approximately 7-10 years of age. After that, full development may proceed directly or may be delayed for 10 years or more. Average completed orangutan life span in the wild is not known, but captive individuals have lived into their late fifties.

Orangutans have been reported to have an average interbirth interval of 8 years – the longest of any primate and indeed on of the longest of any mammal. Infants and juveniles nurse for approximately 6 years, during which time female hormonal production appears to be suppressed. The length of gestation is approximately 8 months. Like humans, orangutans have no estrous swellings and no visual indicators of ovulation, and the average orangutan menstrual cycle has a mean length of 28 days. A surprisingly large percentage of orangutan matings have been characterized as forced copulations. In the wild, undeveloped males appear to engage in more forced copulations and, usually, more copulations in general than do fully developed males. However, both forms of male can and do force females to copulate. Current studies are examining the relationship between the menstrual cycle and reproductive activity in the wild, where data are showing that matings are much more common during periods of high fruit availability when estrogen levels are higher in females. 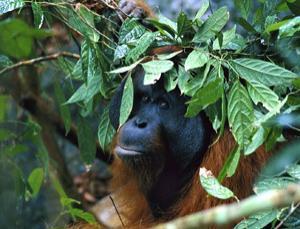 When a heavy rain occurs, many orangutans make rain umbrellas out of leaves and other foliage to shield themselves. These umbrellas are usually shaped into a hat like form that helps to keep them dry.

Orangutans in captivity have been found to be highly intelligent, habitually making and using tools. Orangutans raised in people’s homes and later brought to rehabilitation centers have been taught sign language and regularly emulate human activities. New evidence of tool use in the wild is now emerging. In the recently establishing field study at Suaq Balimbing in Sumatra, orangutans regularly use tools to extract seeds from Neesia fruits as well as to access insects from tree holes. Stick tools of specified lengths are made for each of these tasks. Other tool-using behaviors are also observed in the wild. Orangutans regularly make leaf umbrellas to cover themselves during heavy downpours and use branches in agonistic displays. Occasional observations have been made of orangutans using leaves for self-cleaning and as protection in food acquisition, dead wood for opening up durian fruits, and sticks for scratching. Researchers at Gunung Palung have recently witnessed orangutans using leaves as drinking tools.