Bornean orangutans (Pongo pygmaeus) are internationally recognized as critically endangered. Their numbers in the wild have dropped by 30-50% over the past 10 years, with about only 50,000 individuals remaining in Borneo and 7,300 in Sumatra. Experts estimates that, without drastic interventions, orangutans could become extinct in as little as 20 years.

Orangutans along with the other great apes (gorillas, chimpanzees, bonobos) are our closest living relatives, sharing up to 99 percent of human DNA. Great apes enjoy a rich emotional existence in which they experience complex feelings such as happiness, empathy, and fear. They also share with humans the intellectual capacity to create and use tools and to learn and communicate using sign language. Given their human-like qualities, it can be argued that we have a moral obligation to save orangutans. But, there are also solid environmental reasons to make this a priority. Orangutans are essential to the functioning of the forests they inhabit. Their fruit-dominated diet and large ranges mean they are excellent seed dispersers. Orangutans are thus critical for maintaining the health of their forested ecosystems, which in turn provide important environmental services to humanity. For example, studies indicate that one of the most efficient ways to limit global CO2 emissions is to conserve remaining peatland forests, such as the ones orangutans inhabit, because they harbor vast amounts of carbon. Orangutans are also an “umbrella species”. They require large tracts of forest to survive; thus, by protecting orangutan habitat, numerous other plant and animal species living in their forests are protected as well. Like all great apes, orangutans have long lifespans and “childhoods” and very low reproductive rates, which makes it difficult for them to recover from population crashes. Hence, they are particularly susceptible to extinction.

There are multiple threats to orangutans, which can be grouped into three main categories. These threats are interconnected and driven largely by outside socioeconomic forces; for conservation in Indonesia to be successful, activities must address not only the threats but also the social and economic issues that perpetuate them. 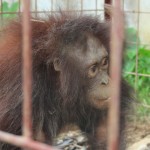 Our Investigation team works to discover and report illegally held orangutans. Orangutans are a globally protected species, but unfortunately are often taken from the forest and kept as pets or sold on the black market. 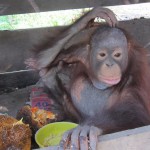 Habitat loss is the biggest threat to orangutan survival. Researchers estimate that orangutan habitat has decreased by over 80% in the past 20 years. Currently the biggest driver of habitat loss in Indonesia is deforestation for oil palm plantations. Global demand for palm oil, which is used in a wide range of products such as cookies, potato chips and soap, is extremely high and thus land for large plantations is highly valuable. Kalimantan (Indonesian Borneo, where GPOCP works) has a long history of palm oil production. Although many groups are working to make palm oil production more sustainable and shift production concessions away from primary forest to degraded lands, the demand shows no sign of slowing and this poses a significant challenge to the continued survival of Bornean orangutans. Habitat loss occurs on smaller scales as well; in the absence of available farming land, local communities may clear forests outside of formal protected areas for agricultural use. Illegal logging in protected areas remains a significant problem as well in places where alternative livelihoods are not available. Finally, land degradation and severe droughts, combined with slash-and-burn farming practices, have led to massive forest fires on Borneo and Sumatra, devastating large patches of orangutan habitat.

Poaching and the Pet Trade

Because humans and orangutans live in such close contact, poaching is another significant threat. Orangutans are often killed when they venture into plantations or crop fields to forage. This form of human-wildlife conflict is exacerbated during forest fires, when orangutans flee their habitat and move into human settlements. Although they are not usually the chief target for bushmeat hunters, orangutans are occasionally taken for food and their body parts can be sold on the black market for medicinal purposes. One of the most common reasons that orangutans (usually females) are killed is so their babies can be sold as pets. Though it is illegal to own an orangutan, hundreds of young orangutans are taken from the wild for the pet trade every year. Most die before even reaching the market as a result of capture-induced trauma or diseases contracted in transit. Orangutan pets are often kept in deplorable conditions (e.g., in chains or small cages) and are neglected. They make dangerous pets, as they quickly grow to be much stronger than their human caretakers. 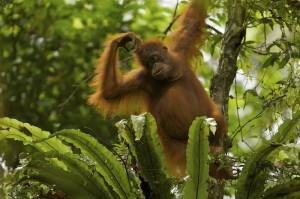 Great apes, including orangutans, are highly intelligent and are thought to have rich emotional lives

Orangutans are internationally recognized as endangered species and there are many groups dedicated to their conservation. Long term research projects such as ours at Gunung Palung National Park are dedicated to expanding our understanding of orangutan biology and ecology. Using this information, conservation organizations work to promote the ecological and intrinsic value of the orangutan, educate people of all ages about orangutan and rainforest conservation, and secure sustainable livelihoods for local people so that they have an alternative to environmentally destructive activities. However, the threats remain, especially given the intense global demand for palm oil products. Orangutan rescue centers are full of orphaned babies and juveniles with the goal that they will be released back into the wild someday, but this depends on the future existence of suitable rainforest habitat.

These are serious threats and the conservation community still has a long way to go to secure a future for wild orangutan populations. But, there have also been numerous success stories: in 2013 GPOCP led an intense effort to prevent 2,000 hectares of Gunung Palung National Park, along with 10,000 hectares in the buffer zone outside the park, from being converted to palm oil concessions. We, with the help of a network of our fellow conservation NGOs and local supporters, successfully lobbied the Ketapang/Kayung Utara Regency’s government to change their spatial plan and save this extremely valuable wildlife habitat from certain destruction. In early 2014 Indonesia’s top Muslim official issued the first ever fatwa (mandate) declaring wildlife trafficking and illegal hunting to be forbidden- and calling Indonesia’s Muslim population to take an active role in wildlife conservation. Multiple orangutan conservation NGOs are currently releasing rehabilitated orangutans back into the wild, where they are flourishing. There is hope for the remaining orangutan populations in Borneo and Sumatra, but we will be only be successful with contributions from every stakeholder: NGOs, local communities, scientific researchers, local, national and international governments, and conservation-minded individuals. Join our Facebook page, follow us on Twitter, or send us a donation to show your support and help us save the endangered Bornean orangutan! Together we can sustain populations of wild orangutans far into the future.