An orangutan found after suffering abuse in captivity

The release of an orangutan found in illegal captivity

"Bob," an illegally held orangutan that GPOCP helped to rescue

Working for the Welfare of Individual Orangutans

Illegal poaching and trading of wildlife remains a major threat to biodiversity across Indonesia, including to Bornean orangutans. To combat this problem, since 2004 GPOCP/YP has employed a strategy of monitoring and investigating wildlife crime. In collaboration with local authorities and citizens, our team of undercover field investigators tracks cases of wildlife crime, chiefly cases in which orangutans are being illegally held captive and/or traded on the black market . We work with the West Kalimantan Natural Resources Conservation Department (BKSDA), the Ketapang Police Department, and International Animal Rescue (IAR) to report wildlife crime and assist in rescuing orangutans when necessary.

Across Kalimantan, numerous of other species of animals are also threatened by hunting and the illegal wildlife trade, including gibbons, pangolins, and hornbills. Over the past decade our work has helped hundreds of orangutans, gibbons, monkeys, birds, and other wildlife find their way back to the forest or to rehabilitation centers. Previously, GPOCP operated an Animal Transit Center in Ketapang to care for and medically treat confiscated and surrendered animals awaiting relocation to their new homes. In 2009, we transferred the management of this Transit Center to International Animal Rescue (IAR); the Center has since been moved to Sungai Awan village, 20 minutes outside of Ketapang town. With IAR focusing on the welfare of the confiscated individual orangutans, GPOCP/YP has been able to better focus its resources and continue investigations of the illegal pet trade, uncovering orangutans that are being held captive, as well as investigating wildlife trade routes and the people involved.

In 2016, GPOCP/YP published an article in the American Journal of Primatology, which examined the prevalence of orangutan poaching in Gunung Palung National Park. This publication is the result of 10 years of work towards documenting and preventing wildlife crime within the park. 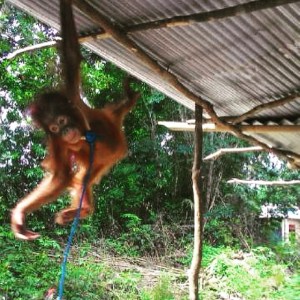 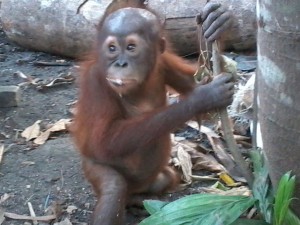 Three of the over 160 orangutans illegally held as pets that have been reported by GPOCP/YP’s investigative team over the past decade. 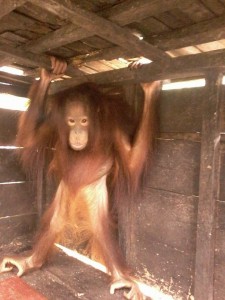