Three weeks ago I arrived at Cabang Panti Research Station in Gunung Palung National Park. Growing up in Jakarta and going to university in the large metropolitan city of Hong Kong, I had been surrounded by a concrete jungle my entire life. Living in the middle of a rainforest had always been just a dream, and I couldn’t believe that I finally had an opportunity to spend six months as a volunteer orangutan research assistant. Looking back, it has been a sweet and humbling journey, and one that I could not have achieved if I hadn’t decided to risk taking a semester off from my university life.

The beginning of the walk into the field station, now a stark reminder of the devastating impacts of the 2015 fire season.
Photo © Rinaldi Gotama

I arrived at Cabang Panti on the 14th of January, completely wet and exhausted after a five hour walk from a nearby village. On the way to camp, I walked through a burnt area that used to be a forest. There was no standing, living tree in the area – it was now a charcoal-black, muddy swamp with little hints of the green ferns that spring up at the beginning of secondary succession. The sky was painted with perfect blue, but it couldn’t lift me up from the sadness I felt looking at scenery this depressing. The fire that scorched this land stopped months ago, yet I could still feel the stinging burn on my legs, like it just happened yesterday. It astounded me that this happens every year, and nothing much has been done to stop this from going on. I walked deeper into the swamp, and a new fire started to blaze within me, the burning desire to achieve my goals to save my country from environmental catastrophe.
In Cabang Panti Research Station, I have been tasked to help the orangutan project’s ongoing research, including processing orangutan urine and fecal samples, filing information into the database, and following orangutans with the other assistants. Among all of these tasks, finding and observing the orangutans has been the highlight of my first month here. I found it really interesting how each individual orangutan can be identified not only by their physical traits, but also by their behavior and personalities! For example, Jumi, the first orangutan I followed, was identified by her sulking and weathered face. She is also very shy – she always tries to avoid being caught looking at us researchers, and she hides behind branches and leaves to prevent me from getting a good photograph of her. Codet, on the other hand, doesn’t really care who’s watching him. He often comes down to the ground, eats termites for hours on end, and isn’t afraid to defend his territory by charging at orangutans (or even people!) who get in his way. 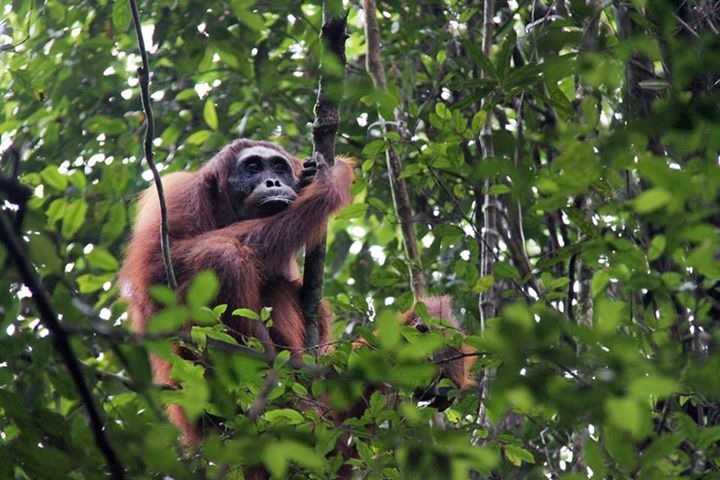 One surprising and unexpected perk of living in a rainforest, in my experience, is the range of weird and wonderful gifts one can be given. Two weeks into my time here Toto, one of the field assistants, gave me a tooth of a wild boar. He suggested that I turn it into a necklace and take it back to Hong Kong. Sure, I said politely, but I immediately discarded the idea, imagining the difficulty immigration officers are going to put me into if I try to bring a ten-centimeter-long tooth of a dead animal to a place where ivory smuggling is a hot issue now. Research manager Kat is no different – one day after she hiked up, she gave me a porcupine quill that she had stumbled across on the way up. But the most remarkable gift Kat has given me so far has been a parang (a blade resembling a machete), which she handed to me as I was about to venture into the forest by myself. I stared at her with a mix of confusion and amusement and she stared back like it was a very casual thing to do. “It’s for the rattan,” she said. 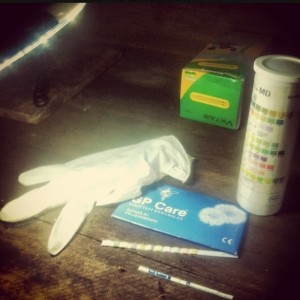 One of Rinaldi’s tasks is to analyze orangutan urine and fecal samples – it’s not a glamorous job, but is a must-learn task for any budding primatologist!

Amazing and wonderful adventures aside, this journey has also been a challenging one. For someone who is just learning, finding an orangutan can be difficult – they hide way up in the forest canopy and they barely make any sound. It’s possible that no matter how hard you scan through the forest vegetation, you can still be oblivious that a giant orange ape is lurking meters away from you. Getting lost in the forest has also been a daily event for me. Whether it’s due to fallen trees, landslides, or simply dropping my glasses, I’m very talented at missing the pink ribbons that indicate a transect pathway. Once, I lost track of a path on the mountain and had to shove through crisp branches and huge logs, only to fall into a red and muddy peat swamp. But, no matter how hard a day becomes, I always have the promise of returning back to the relative comforts of camp, and the memory of when I first sat on the riverside mandi (bathing) dock, gazing on the green and lush surroundings, listening to animal sounds blaring like a jungle orchestra, and breathing in the cool, fresh air. I thought out loud, I can get used to this. And I have.