Based on information gathered by Gunung Palung Orangutan Conservation Program (GPOCP) investigators, a team comprised of officers from the Ketapang Police Department, the Ketapang Natural Resources Conservation Authority (BKSDA), and International Animal Rescue (IAR) have successfully rescued four Bornean orangutans that were illegally held as pets by members of the local community. The Bornean orangutan (Pongo pygmaeus wurmbii) is listed as an endangered species and legally protected by Indonesian law.

The orangutans were rescued from four different counties: Air Upas, Marau, Tumbang Titi and Manis Mata, all in the Ketapang district of West Kalimantan, Indonesia. GPOCP investigators initially gathered and reported the evidence, which was followed up on by the Ketapang Police Department and BKSDA, who then coordinated the rescue operations with IAR. All four orangutans were taken to IAR’s Orangutan Rehabilitation Facility in Ketapang, where they will live until they have regained the skills necessary to return to their forest habitat.

The rescue of the orangutan in Manis Mata is an especially significant accomplishment, as GPOCP initially reported this case to BKSDA over a year ago. On October 18, after receiving information and photographic proof that the orangutan was still chained up and that he was given cigarettes and arak (a local type of rice wine), GPOCP media staff wrote an expose that was published on Mongabay Indonesia. The link to the article was then sent to the Ketapang Chief of Police, who quickly mobilized officers to go to the scene. They then seized the orangutan, turned the case over to BKSDA, and brought the orangutan to IAR’s facility. According to the owner, he had initially purchased the orangutan for approximately $83 USD two years ago. At this time it is unclear if BKSDA will take legal action against the owner.

Habitat destruction is a major factor in the problem of orangutans being illegally kept as pets; remaining pockets of orangutan habitat are easily accessible from local villages and orangutans often wander into human-dominated landscapes as their forest habitat is cleared for oil palm plantations and mining. Mr. Agus Setiyoko, the police chief of the Ketapang district, notes that “the communities can help protect endangered animals, not by keeping them as pets in their homes, but by allowing them Sometimes, getting the appropriate audit is a problem by itself. to live freely in their natural habitats.” Mr. Junaidi, the section head of BKSDA in Ketapang, adds that “We hope the community will help conserve not only orangutans and other endangered animals, but also the forests that serve as critical wildlife habitat.” Orangutans are legally protected under Indonesia’s Conservation Law No. 5 1990, stating that all individuals are prohibited from catching, hunting, killing or owning protected species, including living or dead individuals, or any body parts of these species. Punishment for breaking this law is up to five years in jail and/or 100 million Indonesian Rupiah (approximately $8,300 USD). 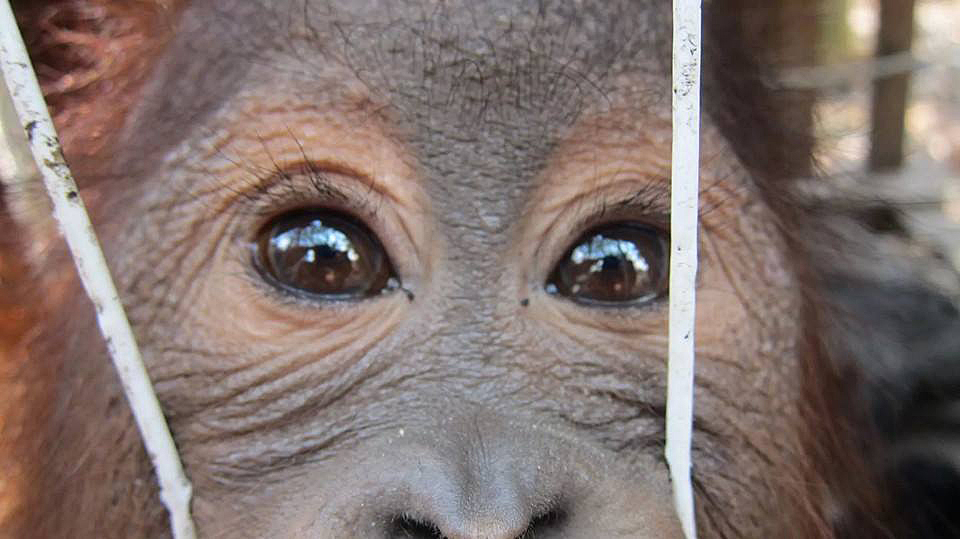 The orangutan in Tumbang Titi, named “Bob” by the GPOCP investigator who discovered him, looks out from behind the bars of his cage. Bob was rescued on October 15, 2014. Photo credit: M. Rizal, GPOCP (Yayasan Palung)

The rescues this month represent a concerted and ongoing effort by a team of orangutan conservationists, including GPOCP and IAR staff as well as local authorities, to address the problem of poaching orangutans for pets in this area of West Kalimantan. GPOCP has been working in the Ketapang district since 1999, with additional conservation programs in the district of Kayong Utara to the north, to protect and conserve the Bornean orangutan populations in and around Gunung Palung National Park. The National Park is critical orangutan habitat, with an estimated 5,000 individuals inside the protected area and its buffer zones. GPOCP’s other programs include environmental education, conservation awareness and promoting sustainable, alternative livelihoods to ensure a future for these animals. GPOCP’s wildlife crime investigation program is funded by the Arcus Foundation’s Great Apes Program. Visit www.saveGPorangutans.org for more information.