When I first got to Cabang Panti, I had heard legendary tales of up to 8 orangutans being seen feeding together in the same tree, sharing food, playing and sometimes even mating. These meetings, termed ‘parties’ by primatologists, are a regular occurrence according to the team. However, after two months in the field, I was skeptical as it seemed that we only had two orangutans in the whole of Cabang Panti—Walimah and Codet. We followed them day in and day out for eight weeks, generally growing slightly bored of following the same focal animals. Occasionally an anomaly would pop up in the form of another orangutan, but it was generally short-lived, as they appeared, ate and left within the space of two days. 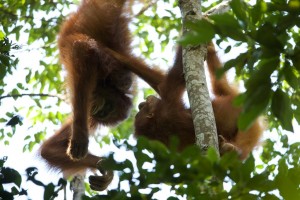 Walimah (left) parties with an unidentified adult female. Bornean orangutans socialize less than their Sumatran counterparts, and witnessing play behavior like this is a rare opportunity.

Alas, Christmas came and our boxing-day special (for our American friends this is the day after Christmas Day in the UK) was of course Codet. As the Project Manager it is my job to assist with keeping camp running, but also to boost morale among the team. This was growing pretty difficult, as despite our vast searching days, we were turning up no one but the same two animals. Don’t get me wrong, orangutans in any form are awesome, but for two months solid, in a forest containing approximately 2,500 orangutans, this was getting a little bit old! Even on days when we weren’t following Codet, he appeared from seemingly nowhere. Once he even long called from several meters above where I was taking a break on the trail.

One day in January, Becki and I went out to Walimah’s nest early in the morning. The assistants had just finished a five-day follow with her, but we needed some new photos for the database and so planned to spend a leisurely few hours observing her. Around 6:00 am the rustling above us indicated Walimah was awake and raring to go. She moved a little and stationed herself on a branch, offering us a good vantage point while she rested. We heard the trees moving in the distance, but ignored it as we figured it was gibbons or a squirrel. The sounds were coming closer and we saw a flash of orange. Due to our isolated location, we figured it was a red langur doing its own thing. Since Walimah had been pregnant she’d been very unsociable and avoided contact with other orangutans. However, as both we and Walimah turned our heads in the direction of the mysterious noisemaker, we discovered it was another orangutan! I was more than a little bit excited as I had not yet seen Walimah exhibit any social behaviour. The intruder was a new adolescent female whom it seemed wasn’t aware that a large rotund orangutan would be blocking her path that morning. The new female turned around and headed back in the direction from which she had come, and in a split second we decided to abandon Walimah and run after this new female. 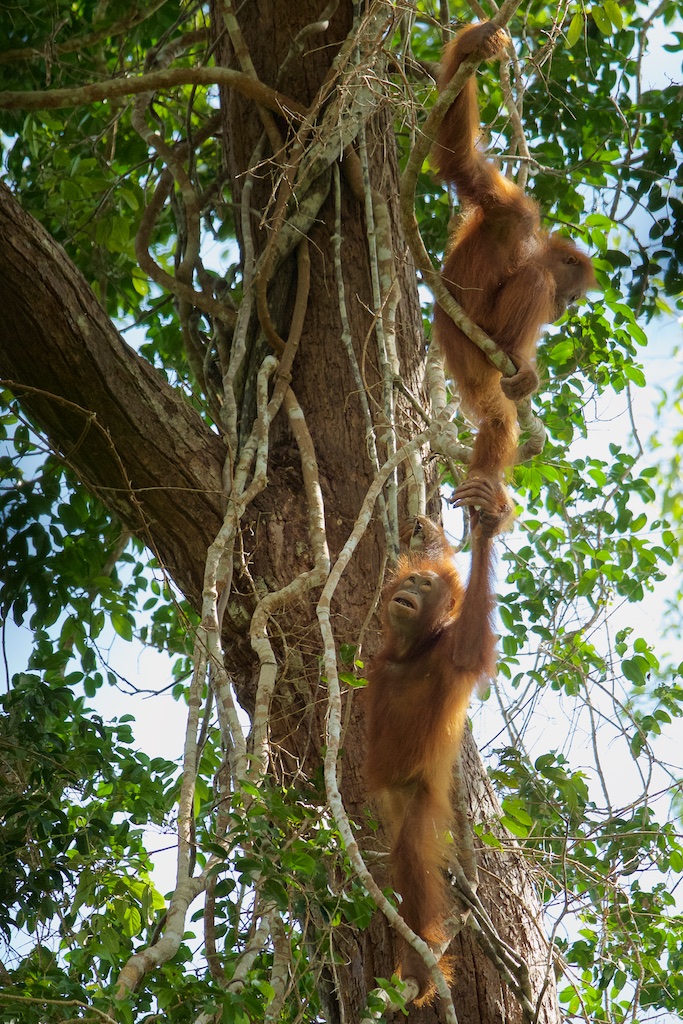 Young orangutans Betsy and Dinda use this vine-covered tree as a jungle gym and party spot.

The female took us to a large Lithocarpus tree (producing fruit like giant acorns), where we soon met another orangutan… and then another. These individuals turned out to be a mother/infant pair named Hera and Harmoni. Prior to this particular January day the two hadn’t been seen since 2010, so this in itself was pretty awesome and we tried to take a lot of photos of them. Hera was obviously not amused by the adolescent female that we had been following and promptly chased her away, forcing us to switch focal animals. By then it was about 7:30 am and we knew that the assistants were soon coming out to search, so I contacted them and gave them our location. Hera and Harmoni weren’t bothered by us at all and took us to a large Neesia tree. Neesia is a large, very heavy fruit that the orangutans love. The fruit itself is shaped like a missile (dangerous if dropped from above!) and the inside is lined with thousands of tiny hairs, which fly everywhere and itch like crazy if they touch your skin. In other sites in Indonesia, orangutans have been known to use tools to break into these fruits (you can download Dr. Knott”s paper about this topic here), but our orangutans just seem to use their teeth! Needless to say, following orangutans who are eating Neesia is pretty precarious and requires careful attention. 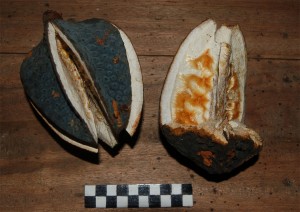 Neesia fruits are large, heavy, and have tiny sharp irritating hairs that fly everywhere when the fruit is opened. However, the orangutans love it!

From behind us, I heard the sound of the rest of the team approaching and I looked back to greet them. Hardi, one of the assistants who was first on the scene, asked which orangutan they should follow. “Well, obviously the mother-infant,” I replied. “Yes, but which one?” asked Hardi. At first I was wondering why he asked that, since we were only following Hera and Harmoni, but then I looked up again and realised that we had accidentally stumbled across what can only be termed an orangutan feeding frenzy. Not only were Hera and Harmoni there, but there was also a mother-infant-juvenile group as well: five orangutans in total! I was totally bemused by the whole situation and couldn’t quite work out how it had happened.

At this point the Neesia hairs were flying everywhere, so we took cover and tried to decide which orangutans to follow. Eventually we settled on the mother-infant-juvenile group and Toto and I moved off with them. Becki called over to say that she had our focal animals and we headed in her direction. That’s when I saw a mother with a tiny infant cross the river. When I called Becki to check that she still had the animals, she replied that she did, and that’s when Toto realized that yet another two orangutans had stealthily made their way into our party. Now we had seven orangutans, five of which we believed to be new to the project, and confusion reigned as we tried to work out which animals were which. Luckily only one of the females had both a newborn and a juvenile in tow, so that made it easier to figure out who our focal individuals were. 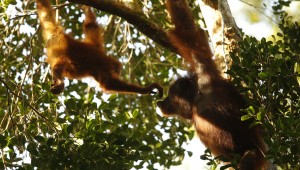 Little-by-little the orangutan party fizzled out and dispersed, and we were left with just three orangutans, having changed multiple animals over the course of just two hours. We managed to follow these orangutans, who we later discovered were Asny, Anik and Asny’s new baby Aspalela, for five full days afterwards. They ‘partied’ a few times over their follow days with other orangutans, and I am hoping this is a sign of things to come at Cabang Panti this year. We have no idea what Walimah made of the whole situation, but for me it was one of the best experiences of my time here so far, and I hope I get the opportunity to experience many more parties like the one in January.