Last fall, especially the months of October and November, were very interesting months at Cabang Panti Research Station. During this period, we found a total of five flanged male orangutans in our study area. Almost every day we could hear long calls, and we even heard them at night when we were getting ready to sleep – usually prompted by tree falls or other loud animal noises. Because our site is actually quite large, extending over 2,100 hectares of relatively pristine rainforest, hearing long calls from our camp is relatively rare and so we felt lucky to be able to hear these every night. To see an exclusive video of a male orangutan long calling, watch here (video © Tim Laman).

While we were following these flanged males, we even saw them come into close proximity with one another. They usually met in or near a large fruiting tree, or sometimes while following a female. However, despite coming within several meters of each other, sizing one another up, and trading long calls, we never saw any fights break out. One of the males, the less dominant one, would always drop to the ground and run away. This presented us with a wealth of information on the dominance hierarchy in Cabang Panti, and is something we want to explore further in our data. Now, as I write this, it’s been almost a month and a half since we have seen or followed a flanged male. The last individual that we followed was Alfred, in March, and before that, in January, we found and followed Prabu. On one of the days we followed Alfred, we also met another flanged male who came within 10 meters of us! However, this close proximity was quickly interrupted by Alfred’s bellowing long-call, which sent the other male running in the opposite direction. 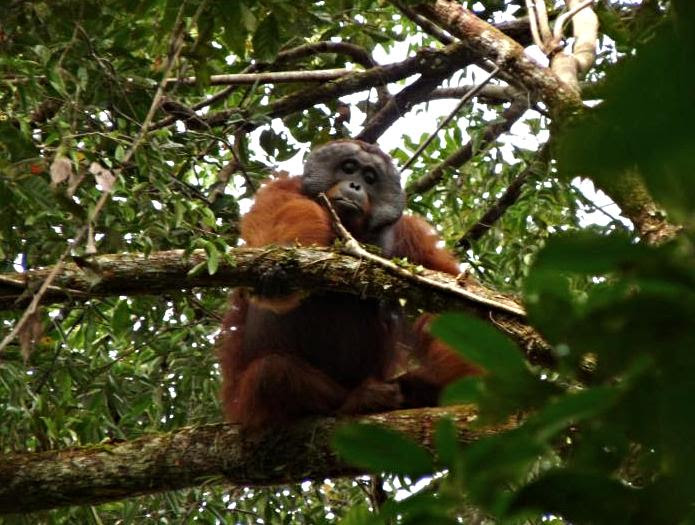 Flanged male orangutan, Prabu, watches over the forest canopy for intruders to his territory.

This near-lack of flanged males lies in stark contrast to our findings last fall. We haven’t heard any long calls, and everything is quiet. It feels like there are no flanged males anywhere in the forest. This is very interesting, and is one of the reasons that we are so eager to find out where flanged male orangutans go when they are not in our study site – a question being investigated now by Robert Rodriguez-Suro’s project. This lack of males is likely linked to the lack of fruit we have had in Cabang Panti since January. The research site covers eight different forest types: alluvial bench, freshwater peat, peat swamp, kerangas, lowland sandstone, lowland granite, upland granite, and montane. Generally, trees in the different habitat types fruit at different times and the orangutans rotate through the different habitat types in accordance with fruit availability. While the end of 2015 brought an abundance of fruiting trees of many different species, such as the Chaetocarpus that dominated our orangutans’ diets in December, since then Cabang Panti has had little to offer orangutans. In contrast, people living in the villages bordering the National Park have reported seeing orangutans closer to their villages, feeding on the wild fruit trees in the outer peat swamp forests.
Another potential explanation or factor in why it has been so difficult to find male orangutans lately is that when fruit availability is low, it seems that the males reduce their long call frequency. One function of long calls is to signal a flanged male’s position to other males in the forest, but when fruit availability is low, the risk of running into rivals foraging in the same area decreases, and it appears that the males long call less in this case. For example, when we followed Alfred for four days in March, he only long called 1-2 times per day, but during our follow in December, when the Chaetocarpus was heavily fruiting, he called 4-5 times per day. Oddly enough, despite being very large with long red fur, orangutans can be fairly cryptic. Therefore, if they don’t make any noise, they are very difficult to find.

Flanged male orangutan, Codet, relaxes in his nest. Codet’s territory spans most of Cabang Panti research site, and he is therefore one of our most followed male orangutans.

Cabang Panti differs from other field sites in Kalimantan in that the forest that we work in remains relatively continuous. While a blessing for the orangutans, it can make it harder for researchers to follow them once they leave the study area, as this is a very common occurrence. As we continue to collect data on orangutan ranging patterns and food availability, as well as other variables, we hope that we can further understand male orangutan movement. But for now we just have to keep searching!