Walimah had her world debut in the pages of National Geographic magazine. In the October 2003 issue she appeared as a tiny infant, only a few weeks old, clinging, with eyes shut, to her mother, Marissa. Since then, we’ve carefully observed her in every stage of her life as she has gone from a newborn to a new mother. As with all orangutans, the first few months Walimah never left her mother’s body, but then she gradually started venturing off, with only about 20% of her time spent on her mom by the time she was three. An infant orangutan first starts to move around and play from the relatively safe enclosure of their mother’s nest. We watched Walimah as she took her first bold forays, gradually moving 1 or 2 meters away from her resting or feeding mother by the time she was a year old. Much of a young orangutan’s life is full of acrobatic play as they learn to easily negotiate their three-dimensional canopy world. Often as not, you see them swinging upside down from the most delicate of branches. 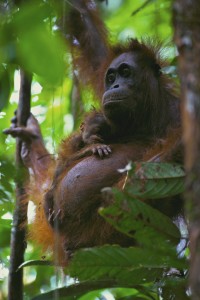 Orangutan birth is truly a rare event. They only have a baby once every 6-9 years — the longest birth interval of any mammal! It was this remarkable feature of their biology that first drew me to Indonesia to uncover the relationship between their food intake, in this vastly fluctuating forest, and their hormonal levels. Since the day we found out Walimah was pregnant, we have been diligently tracking her progress in order to better understand orangutan pregnancy in the wild. This effort was made easier by the fact that Walimah is one of our most habituated orangutans and normally has no objection to us following her and recording her every move. Through documenting her daily caloric intake and energy expenditure, and charting that against her hormonal levels, we will soon be able to discover what kind of an impact pregnancy had on her physiology. We’ll do the same thing through the many years of lactation and see just how long her hormonal levels remain suppressed.

When Walimah was found in March, we hadn’t seen her for several weeks, despite diligent searching across every mountain ridge and all the vast peat swamp patches. We knew that her due date was fast approaching and so we were desperate to find her again as quickly as possible. On the 11th of March, Assistant Manager, Rusda, was travelling along the side of the mountain when he came across a female with an infant. She kiss-squeaked furiously and even threw branches at him, before getting back inside her nest. He was unsure at first who this angry female was, but after waiting for several hours it turned out to be Walimah! And sure enough she had a tiny little baby on her — a girl we think, although it’s often hard to tell at first. Since then we have been following her every day and recording how she is transitioning into her new role as mother. 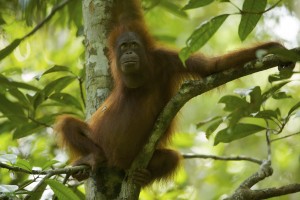 Walimah as a carefree adolescent in 2009.

Indeed, Walimah seems to have adapted very quickly to her new position, assisting her baby with holding on and resting whenever the little one needs to sleep. Orangutan infants are usually positioned on the mother’s side or stomach – very rarely on her back, as in chimps. Contrary to popular belief, infants and juveniles grab onto the mother’s loose skin and not just a handful of hair. They are born with a strong grasping reflex to hold tight – something that human infants are born with as well, but that we quickly lose. For orangutans, though, maintaining an ironclad grip is a matter of life or death and it’s reassuring to see that they are holding tightly onto something that won’t give way. They also seem to rarely use their feet for grasping, instead relying on those fiercely strong little hands.

Walimah’s infant goes wherever she goes, whether gently swinging through the trees, or hanging upside-down in order to dig out termites from a rotten tree. She is most definitely a foodie, she will hunt out food from the most unlikely sources, so we are expecting that Walimah will pass this information on to her daughter. Behavior-wise, Walimah is resting more, especially when the baby needs to sleep, and she has been either lying on her back, allowing the baby to spread out over her stomach, or she has been cradling her in the crook of her thigh. With our detailed data on her body positions and activities, we will be able to quantify how these aspects of her behavior have changed now that she has a little dependent offspring to watch out for. 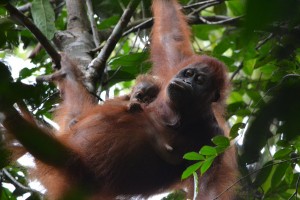 We are grateful that both Walimah and her baby are healthy, and despite our recent downpours, are able to continue enjoying a protected life in the Bornean rainforest. With our continued conservation efforts we are hoping to keep it that way!