As the Program Director, a big part of my job is to keep up-to-date on conservation news – first and foremost about orangutans, but also about the conservation of the rainforest and other species on Borneo, and across Indonesia as a whole. Our work, to protect the orangutans in and around Gunung Palung, cannot be divorced from the country”s social and political climate, and I like to understand what other NGOs and governments are doing so that we can maximize our conservation impact. So, I read a lot of articles about orangutans, the wildlife trade, Borneo, conflict between communities and palm oil companies, and all kinds of other related topics. Most of my sources these days are colleagues sharing links on social media. This is one of the great things about Facebook and Twitter; these platforms help conservationists share information and lessons learned with just a few clicks of the mouse or a few buttons on our phones. Most of these articles are also written for a more popular audience, which is key to getting people, regardless of their scientific knowledge, interested in protecting the world’s wildlife. This month I wanted to share five of my favorite recent articles about developments in the conservation and study of Indonesian wildlife species. Each one is in some way relevant to the work that we do here in Gunung Palung. So without further ado, my top 5 “What I’m Reading” list! The mountainous habitats in Gunung Palung National Park may someday serve as “refugia” for orangutans whose primary habitat has been lost due to climate change. Photo © Tim Laman.

A recent scientific paper by Struebig et al. explored how the combination of continued deforestation and climate change might affect the future availability of orangutan habitat. Orangutans, like other animals, will likely be forced to move to higher altitude habitats as lowland and peat swamp forests become simply too hot to inhabit. Thus researchers have identified approximately 42,000 square kilometers of “refuge” habitat that may become available to orangutans as climate change continues. One such refuge is Gunung Palung National Park! Because the Park encompasses the full range of possible orangutan habitats, from lowland and peat swamp forests to montane rainforest, its protection may become critically important to the survival of the Bornean orangutan in the future. This is yet another reason why we feel our work is so important – conserving Gunung Palung National Park will contribute to orangutan conservation both now and in the future. Until now, most scientists had not considered the effect of climate change on great apes, because there are so many other urgent threats to their survival, but this new research helps us look ahead to the long-term fight to protect orangutans and their habitat.

2. Saving the Jungle Hipster of Borneo 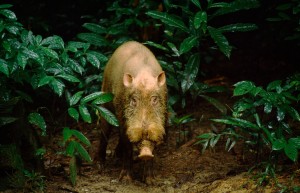 If I asked any group of people to name the most important Bornean wildlife, I’m not sure anyone would say “the Bornean bearded pig,” which is why I found this editorial by Erik Meijaard so fascinating. Before now I”d never seen bearded pigs get airtime in the overall discussion about conserving Bornean species, but Meijaard makes a very compelling argument for why they should get more attention. These pigs play an important role in forest ecosystems as seed predators and dispersers. They are also a source of bushmeat for Borneo”s Christian population and this may be a valuable tool in wildlife conservation, because as rainforest disappears, this source of food will as well. With an estimated market value of at least $120 million, this is a very tangible consequence of deforestation for these forest-dwelling communities, making conservation an attractive proposition. Although GPOCP is primarily an orangutan conservation organization, understanding the socioecological factors surrounding the protection of other species, including the Bornean bearded pig, is important to developing a holistic forest protection strategy.

Social media, especially Facebook, is a popular platform for the illegal wildlife trade in Indonesia. In May, in one of the most shocking cases of wildlife trade this year, police on the Indonesian island of Java announced that they had discovered a smuggler carrying 23 highly endangered birds to Jakarta, stuffed inside of plastic water bottles. These included 22 yellow-crested cockatoos and one Eclectus parrot, both of which are endemic to the Maluku Islands in eastern Indonesia. Although Indonesian conservation authorities report that they are strengthening customs at major air and sea ports, it is abundantly clear that Indonesian wildlife laws, including their enforcement and penalties for breaking them, also need to be strengthened. Weak law enforcement is a significant problem in orangutan conservation as well, because if there are no real consequences for breaking wildlife protection laws, then people will continue to poach animals from the wild for the illegal pet trade. The threat of five years in jail and/or an approximately $7,500 fine is simply not enough to deter people from the highly lucrative trade in endangered species. Because the images of helpless birds confined to small plastic bottles was such a sensational example of the illegal wildlife trade, this particular story has helped put pressure on Indonesian authorities to strengthen conservation laws. A yellow-crested cockatoo smuggled inside of a plastic bottle in Java, Indonesia. (Photo © Reuters/Antara Foto/Risyal Hidayat)

Large-scale deforestation for oil palm plantations is one of the leading factors in the decline of many of Indonesia’s endangered species. Unfortunately, Sumatra and Borneo, the only two islands in the world where orangutans exist, are also prime real estate for palm oil. The situation in Sumatra is even more severe because Aceh’s Leuser Ecosystem, home to orangutans, tigers, elephants and Sumatran rhinos, is quickly being destroyed by oil palm companies. This is the only place on earth where these large mammals all coexist, as well as one of the last strongholds for the critically endangered Sumatran orangutan. Dozens of NGOs are working to protect Leuser, but even with strict oversight, palm oil companies have still been able to secure permission to develop this area. The dynamics between local communities, the Aceh and national government, and these companies (who have very deep pockets) are incredibly complicated and right now it appears that there will be no ramifications for this illegal land clearing – yet another indication of the need for stricter law enforcement by the Indonesian authorities.

First and foremost, this article is interesting because gibbons are awesome. The way they can effortlessly swing through the trees makes orangutans look positively clumsy by comparison. And, as it turns out, gibbon calls serve as predator warnings, with different frequencies indicating different predators (tigers, leopards, birds of prey, and pythons). Researchers believe that further analysis of gibbon communication may shed light on the evolution of human speech, as “context-specific communication” is a key step in the development of more complicated verbal interactions. One common argument for primate conservation in general is that by protecting – and studying – them, we can learn about ourselves. I like to think that in doing the work that we at GPOCP do, we’re not only conserving biodiversity for the future, but also preserving the past. After all, who knows how many other secrets about human evolution the gibbons, orangutans, and other primates hold? 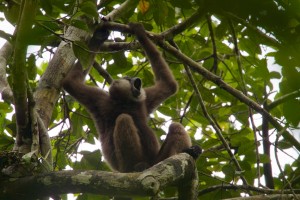 Gibbon songs are highly complex and often described by listeners as “hauntingly beautiful.” Now researchers have learned that their short ‘hoo’ calls alert other gibbons to the presence of dangerous predators. (Photo © Tim Laman)

Finally, I’d like to take a minute to talk about how to stay positive about conservation in the midst of what can, at times, feel like a mountain of bad news. After reading back over my list, it occurred to me that three of the five articles here dealt mainly with bad news: climate change further restricting orangutan habitat, birds stuffed in plastic bottles, and the deforestation of one of the most unique and biodiverse places on earth. It is important that the conservation community as a whole also publicize the success stories, so that we don’t become “the most depressing scientists on the planet.” For example, let’s celebrate the fact that over 18,000 new species have been described in just the past year, including a new primate species from Brazil. One a more local level, I’ve personally noticed that the Indonesian people seem more invested in conservation than ever before, and there have been a number of grassroots petitions asking the government to stop forest fires and strengthen wildlife protection laws. After the story about the smuggled birds came out, messages to save Indonesian cockatoos started trending on Twitter and people reportedly were lining up to turn in birds that they had kept as pets because they realized that they should live in the wild, not cages. It’s quite the change, and I hope that it continues so that future generations have the opportunity to see orangutans and other wildlife in their natural habitat far into the future.