July 29, 2015 is a day I’ll never forget. It was our first day back to the field station for summer vacation. We were searching for orangutans and Kat, the Research Manager, had just found 3 – all in the same tree! We quickly went over to see this unusual event and then my son, Russell, noticed something moving in a nearby tree. It turned out to be Walimah, the orangutan that we were most anxious to see.
Just a month earlier, we had been preparing to go back to Borneo for the summer and were particularly excited to see Walimah with her brand new baby. My husband, Tim Laman, had been able to make a quick trip out to Indonesia in March and took some amazing pictures and video of this newest baby orangutan. I’ve followed Walimah since she was born and watched her grow from a baby, to an awkward adolescent and finally into a new mother. However, right before our departure, we received some tragic news. Walimah, who hadn’t been seen for some time, had been found again, but the discovery was grim. She no longer had her baby and was seriously injured – with a large chunk missing from her foot. This was devastating news to the research team. Walimah, the orangutan with her home range most closely matching our research area, the animal that we had followed since her birth, the one whom we had spent over 14,000 hours observing during her lifetime, had suffered a great tragedy. How could this have happened to her? 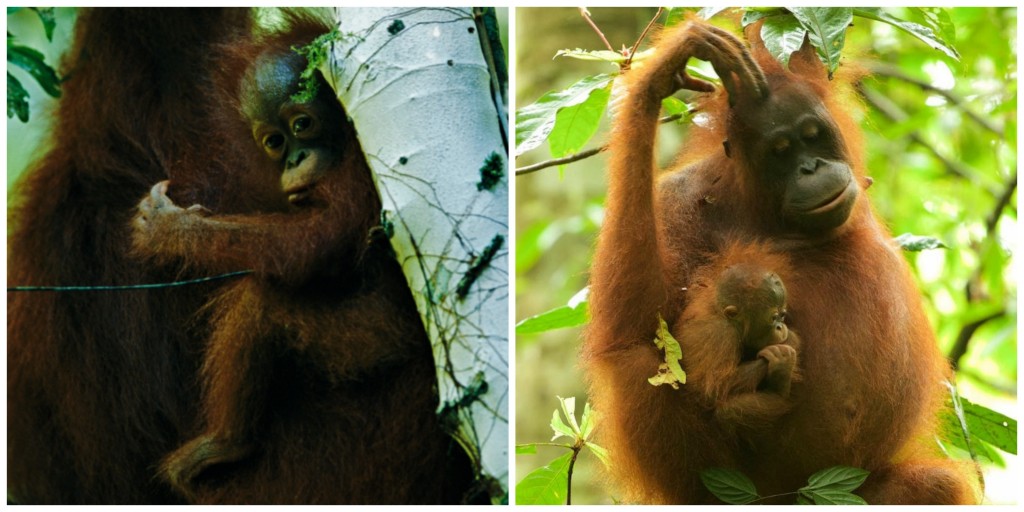 Orangutan infant deaths are extremely rare. In fact, in the over 30-year history of the Cabang Panti Research Station we’d never documented even one infant death. Other orangutan research sites have similarly low rates of infant mortality. Compared to chimpanzees and gorillas, the survival rate of infant orangutans is remarkable. But, it also makes sense. Since orangutans only give birth once every 6 to 9 years, high rates of infant loss wouldn’t be very evolutionarily advantageous. Thus, the high infant mortality that is a regular part of life for many species, is not the case with orangutans, and was something that our research team had never faced before.
We’ll never know for sure what happened to Walimah’s baby and what caused her injury, but the juxtaposition of her severe injury with the loss of her infant points to a singular cause. What or who could have done this? We considered the options. The largest predator in Borneo is the medium-sized clouded leopard. But the evidence didn’t match up. Walimah’s foot injury was much too wide to have been delivered by a clouded leopard, who only have a three-centimeter gap between their canine teeth. It’s also unclear if this cat would have the jaw strength to bite off a large part of her foot. Clouded leopards jump on their prey from above, delivering bites to the neck or shoulder. They don’t attack the feet. There have been 3 known cases of suspected clouded leopard attacks on orangutans, but all have reportedly involved either juveniles, rehabilitants or marginalized females that were habitually traveling on the ground. Walimah, with her new infant, didn’t fit this profile and as far as we were aware studiously avoided any ground travel with her new baby. Another possible animal to consider was a sun bear. These small bears can sometimes attack people when surprised or provoked, but have never been known to attack an orangutan. Sun bears can climb trees, but their arboreal skills are no match for an orangutan who could easily get away. Walimah also had no other wounds like the slashes that would accompany a cat or bear attack. We also considered the worst possibility of all: that this injury was human-induced. We found small comfort in the fact that her injury didn’t match the slice that a parang, or other weapon, would deliver, and the knowledge that humans who intend to take baby orangutans always kill the mother to get them.
Who, then, is the only animal known to frequently injure orangutans? The answer is other orangutans. Thus, this may be the first documented case of a likely infanticide in wild orangutans. Infanticide, the intentional killing of an infant, is relatively rare, but does occur with some frequency in many primate species. My undergraduate advisor, Dr. Sarah Blaffer Hardy, was the first scientist to explain the mystery of infanticide in primates. She documented this in langurs from India, discovering that infanticide occurred only in specific situations – when an incoming male took over a rival male’s group of females. After the takeover, these males would often kill any lactating offspring. Sarah explained, how, although abhorrent by human standards, this represented a male reproductive strategy. Because of the suppressive effect of lactation on female reproductive functioning, killing a female’s infant means that she will start cycling again sooner, and thus the new male will be able to father his own offspring much sooner than he would otherwise. In addition, this act decreases the reproductive success of his competitor. Since this discovery, infanticide has been found in at least 62 species of primates and in many other species. 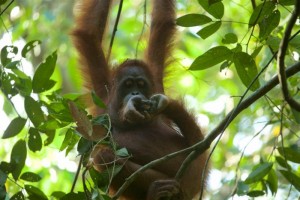 Walimah has adjusted well to her tragic injury. 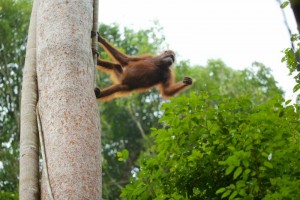 Orangutans exhibit certain features that would seemingly select for infanticide, including long inter-birth intervals with longs periods of lactation, and a semi-solitary existence that increases their vulnerability to predators. However, up until now, no infanticidal attack has been documented in the wild. I don’t think this is particularly surprising, given that these are rare events and, because orangutans are solitary, the number of hours spent watching them is much lower than in other apes, where many individuals are typically monitored at once. Our research program has also documented that females seem to engage in behaviors that indicate that infanticide is a potential risk. One example of this is that newly pregnant females seek out matings with multiple males. When such “post-conceptive’ matings occur, as they do sometimes in other species, they are interpreted as a strategy by the female to try and confuse paternity. Without the benefit of paternity tests, most male animals seem to assume that they could be the father of the offspring of females with whom they have mated. Additionally, one of my graduate students, Amy Scott, has recently analyzed some of our behavioral data and found that females become more protective of their infants when adult males are close by.
So, what happened to Walimah? We can’t say for sure, but our best guess is that she was attacked by a male orangutan, who killed her infant and, in the process of her fighting him off, bit and severed part of her foot. I can’t help but imagine the struggle that occurred and the terror that she faced. Could this have been a male reproductive strategy? Within weeks of her injury she was seen consorting and eventually mating with a male. Thus, this is certainly a possibility.
This latest and very sad chapter in Walimah’s life shows us that, yet again, there is so much about the lives of wild orangutans that we are only beginning to understand. Her wound has fully healed and she now gets along amazingly well as evidenced by the acrobatic display shown above. We can only hope that the next chapter will be a happier one.
All photos in this blog post ©  Tim Laman.