It’s 4:00 AM. Somewhere in the middle of the Bornean rainforest, a pair of hammocks hang among the trees and the leaf-littered ground. Within one of them, a watch alarm is going off, and I open my eyes to silence it. “Time to get up already?” After taking a couple moments to regain my bearings after a seemingly short night of sleep, I peek through the mosquito netting of my hammock. Rays of moonlight shine through the canopy, and the grounds of our campsite glow with an eerie spectral light. Petrichor – the smell of the earth after a light rain – fills the cool night air. As I zip open my hammock, I feel a soft breeze upon my face, and I roll out to begin my day. It’s our fourth night in a row sleeping out in the rainforest, and my assistant Evan and I find ourselves in an area 1.5km outside the southern borders of the Cabang Panti trail system. We are totally alone, our existence confirmed only by mutual acknowledgement. Here, the surroundings are unfamiliar; there are no trails, no flagging, and no tags to mark the way. The only thing known to us at that moment is our purpose, which is to continue following a mysterious male orangutan we’ve encountered traveling outside the borders of the research site. His name is Jabba, and we’re hot on his tail to gather data for my National Geographic Young Explorer’s project, titled The Lives of Orangutans: Mapping Male Orangutans’ Daily Lives and Ranging Patterns through the Use of Longer Term Follows. As the title suggests, this work involves mapping the home ranges of male orangutans by following them for longer-than-standard periods, tracking their daily movements with GPS, and photographing and video-recording their movements and behaviors. 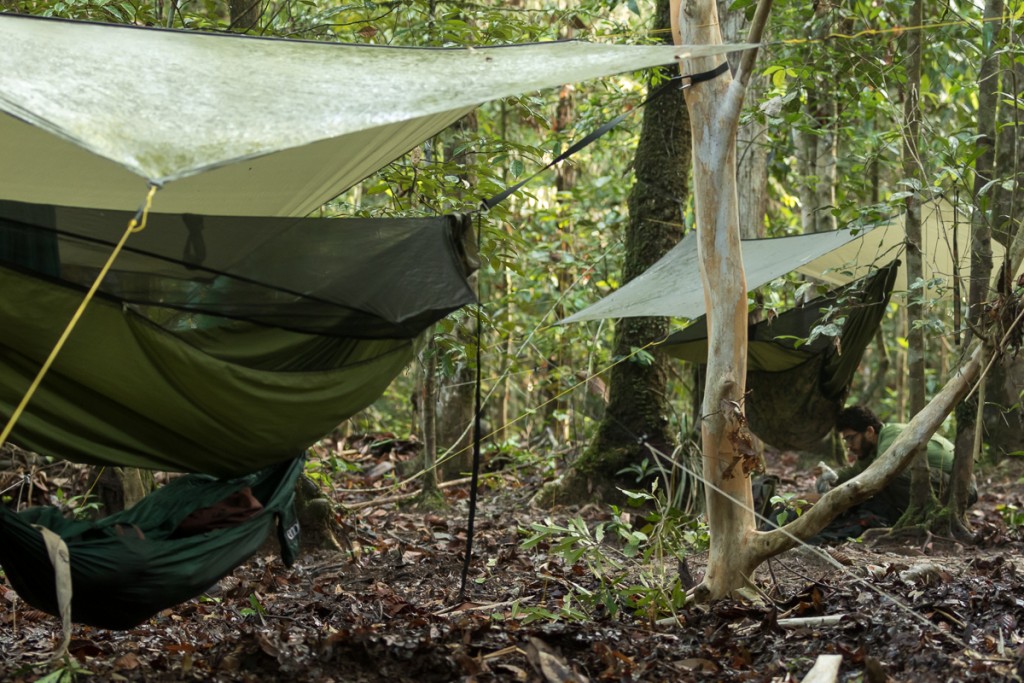 Hammocks set up in the rainforest, although simple, are a comfortable camp for Robert and his field assistants. Photo © Robert Rodriguez Suro

Orangutans, particularly male orangutans, have huge home ranges. So huge in fact, that researchers have had a very tough time definitively estimating their true size. Traditional research methods, which involve operating out of a base station located in the center of the research site, hiking out to the orangutan’s nest location at 3:30 AM, following them for a full day until they make their night nest in the evening, and returning to camp afterwards to repeat the process the day after, preclude following orangutans when they nest at great distances from the base camp. This, paired with the reality that research sites are often, if not always, significantly smaller than what is believed to be the maximum home ranges of male orangutans, means that tracking male orangutans to the fringes of their home ranges soon becomes impossible using traditional methods. This is where my research project comes in. By staying with the orangutan for ten days in a row, we’re able to follow them in new areas, longer and farther than ever before. This accomplishes three goals: 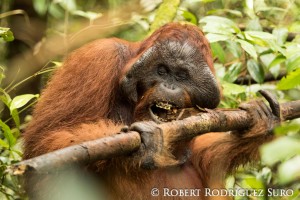 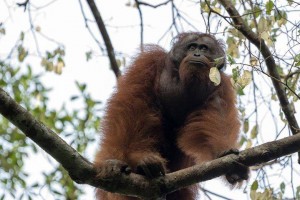 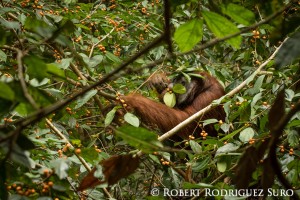 By equipping ourselves with the right gear, food, and supplies, obtaining ranging data in areas outside the boundaries of Cabang Panti Research Station is no longer a barrier. When the orangutan leaves the trail system, we simply stay the night in the forest. There is no need to return to camp if we have everything we need to survive out there. By carrying our food, water, and shelter, we’ve essentially turned our backpacks into convertible, mobile base camps. For food, we carry Indonesia’s finest assortment of trail-ready food, including canned corned beef, processed cheese, and crackers. Not the sort of menu you expect to find in a five-star restaurant (or even a two-star restaurant for that matter) but it gets the job done. At the end of the day when we finish following and begin filling our bellies with corned beef for dinner, we’re always happy. For water…well, it’s the rainforest, how hard could it be to find water? We collect water from anywhere we can: rivers, swampy puddles, creeks, and even directly from the rain. Most of the river water is safe for direct consumption, but we treat water from questionable sources with filters when we need to. For shelter, we use hammocks rigged up with a tarp. We’ve spent many nights in the jungle under heavy rain, but it’s a pleasant experience to hear the sounds of the rain crashing on the leaf-litter and splashing in the swamp while staying dry in our hammocks under a well-rigged tarp. Day in and day out we continue our orangutan follows. I’m in charge of visually tracking the orangutan and documenting behavior on photo and film, and Evan takes the the behavioral data.
With this system in place, we’re capable of following orangutans for ten days in a row, and that’s what we shoot for. Staying in the forest for that long is not always very pleasant though. There are definitely a lot of hardships that we deal with daily. In the rainforest, humidity and wetness are the natural order of things. But because we don’t have the luxury of returning to camp to get dry clothes, it’s very important to combat the water and stay as dry as possible, not just for comfort but for our health as well. Hiking around with wet clothing and socks in the rainforest is a great recipe for promoting chafing, fungal infections, and swamp foot. In the end, nature will always win out over our best efforts to remain dry, and we often find ourselves miserably soaked. We deal with it as best as we can, and being able to dry out a bit overnight, while we sleep, is usually enough to stave off any serious issues. You can also imagine that after a few days in the forest, our clothing can get dirty and…odorous, to say the least. But that’s expected, especially when we’re sweating constantly from carrying so much gear. 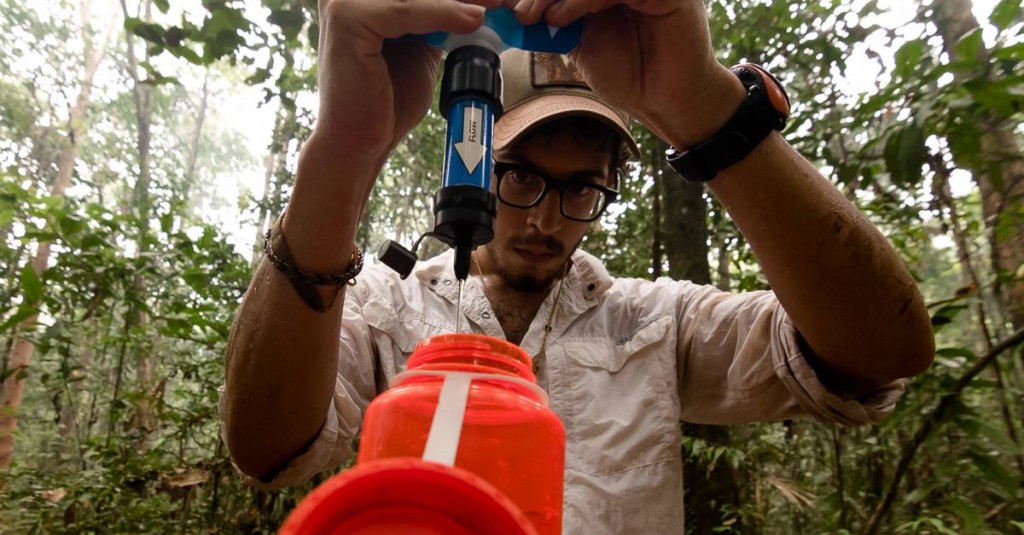 So far this year, it’s been an interesting experience, and some things haven’t turned out exactly as I’d expected. When I was a research volunteer here in 2013-2014, I observed that the male orangutans would travel long distances every day, and traveling beyond the borders of the transect was a regular occurrence for them. This year, that hasn’t been the case. In fact, not once in the last seven months has a male we’ve found within the transect system gone more than 300 meters beyond the borders of the research site. Instead, they’ve been eating a lot of leaves and bark, typical fallback foods that they consume more frequently when fruit availability is lower, and this is having a significant effect on their daily activity budgets. They also don’t seem to be socializing very much. Another surprising observation is that males are often making their night nests between 3:00 and 4:30 PM, much earlier than I’d grown accustomed to in the previous year. While these circumstances certainly make answering my main research question much harder, it’s clear that something interesting is going on, and it’ll be very informative to compare my data set from this year of research to other periods of time.
One thing that I can say for sure is that I’ve witnessed and documented plenty of cultural behaviors that I’d never seen before. This is especially true with one orangutan in particular: Codet. Ever since the first time I met him in 2013, he’s been my favorite orangutan. This year, I’ve followed him extensively. Follows with Codet somehow seem a lot more intimate than with those of other orangutans; he’s visible almost all of the time, and he allows me to get up really close to witness some incredible things. For one thing, he does virtually all of his traveling on the ground, an oddity for a mammal considered to be arboreal. I’ve also never seen an orangutan eat so many termites from the ground. Watching him use his teeth to work through a fallen branch on the ground that’s been infested with termites is pretty impressive. One of the most surprising things I saw him do this past month was drink water straight out of the river and then do a strange cultural behavior I’d never witnessed before. With his mouth full of water, he would proceed to put leaves in his mouth and slowly let the water drip out, while apparently sucking on the leaves. Could this be the orangutan equivalent of mouthwash? Could orangutans actually have oral hygiene behavior? It was very interesting to witness. On the downside, I had to jump into the water with my camera and monopod and wade to the middle of the river in order to have a clear shot to film him. But, I’m glad I did because now we have proof and documentation of what may be a new orangutan cultural behavior at Gunung Palung. It sure makes lugging my heavy camera equipment around the forest worth it. 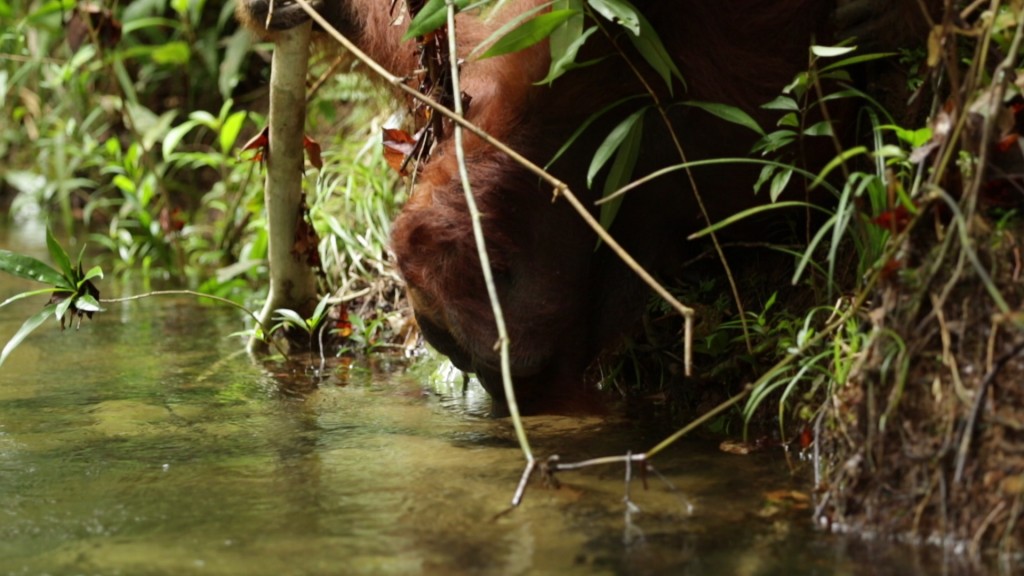 A snapshot of Robert’s video showing Codet as he drinks water directly from the river. Photo © Robert Rodriguez Suro

I still have a few months left at Cabang Panti, and I’m sure many surprises are still in store for me. It’s impossible to predict what an orangutan will do – or where he will go – on any given day. It’s a job that takes a lot of patience. There have been instances where I’ve spent weeks searching for orangutans in vain, and begun to lose hope. There have been follows where an orangutan has done nothing but eat at the same tree for the entire day. It’s easy to lose your mind during follows like these. But every once in a while, I witness that one behavior that I’ve never seen before, or find an orangutan somewhere I’ve never followed before, and I find myself hooked again. Orangutans are amazing creatures, and I feel incredibly privileged to be able to spend so much time with them in the wild. I feel that I’ve grown close to them, and seen into their daily lives. A big goal of mine is that through my research and photography, others can get to know these orangutans as well as I do throughout this year, so we can all understand them, appreciate them, and ultimately protect them from going extinct.
You can follow Robert and his National Geographic Young Explorer’s Project on his Instagram @rrsuro (Instagram.com/rrsuro), Facebook page (fb.com/rrsuro.photo), and Twitter @rrsuro (twitter.com/rrsuro)