The day began like any other. As with most orangutan research, our days at Cabang Panti start early and end late, sometimes with little variation and often involving long stretches without anything particularly unusual happening. But some days are indeed more exciting than others – you can”t expect or predict them, and they usually happen when you are least expecting it. We were following Walimah, one of our best known and most followed individuals. Followed on and off since birth, she is extremely habituated, and thus totally undisturbed by our presence. And what made her even more interesting was that she was pregnant for the first time in her 16 years. Innovative and intelligent, Walimah has provided us with a detailed and impressive database of orangutan behavior over the years. 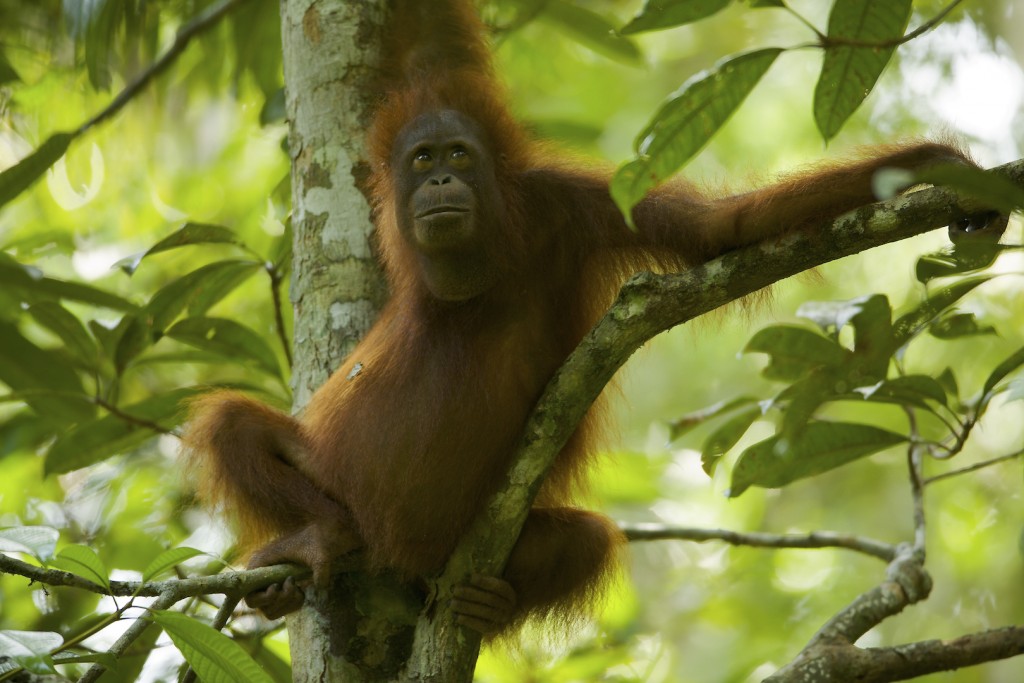 Adolescent female, Walimah, takes a break from foraging to look across the canopy.

This particular day involved a very lazy morning – she slept late, and once risen, continued into the neighboring tree which soared high above us, blocked by a swarm of tangled lianas and vines, for her first feeding bout. After three hours of eating, and very little sight of her, Hassan, Toto and I were resigned to the fact that today might just be a particularly slow day. We couldn”t blame her – it couldn”t have been easy to travel long distances at her stage of pregnancy. Once finished, she finally came down from the tree into our line of sight, and began making her way onwards through the forest. Suddenly she came to a halt and swung around a particularly exposed tree. Hassan was busy taking data, and Toto was tracking her movements with his GPS unit.
After a few moments” pause, Walimah started to take an interest in a hole in the tree, and all three of us could sense that something exciting was about to happen. Toto (during the three hours that she had been feeding) had cleverly made his own monopod out of a fallen branch, and attached his Handi-Cam to it improve the quality of his video. Our team had just recently been given these video cameras through a National Geographic Expedition Council grant to Tim Laman and Cheryl Knott. We now carry these video cameras during every follow with the aim of documenting the full range of interesting, but rare, behaviors that we are sometimes privileged to witness. All we needed now was a good vantage point. Toto and I scrambled up the hill and found a beautiful break in the trees just as Walimah began demonstrating a particular behavior that is rarely ever seen in Cabang Panti – a “water finger drip” from a tree hole. 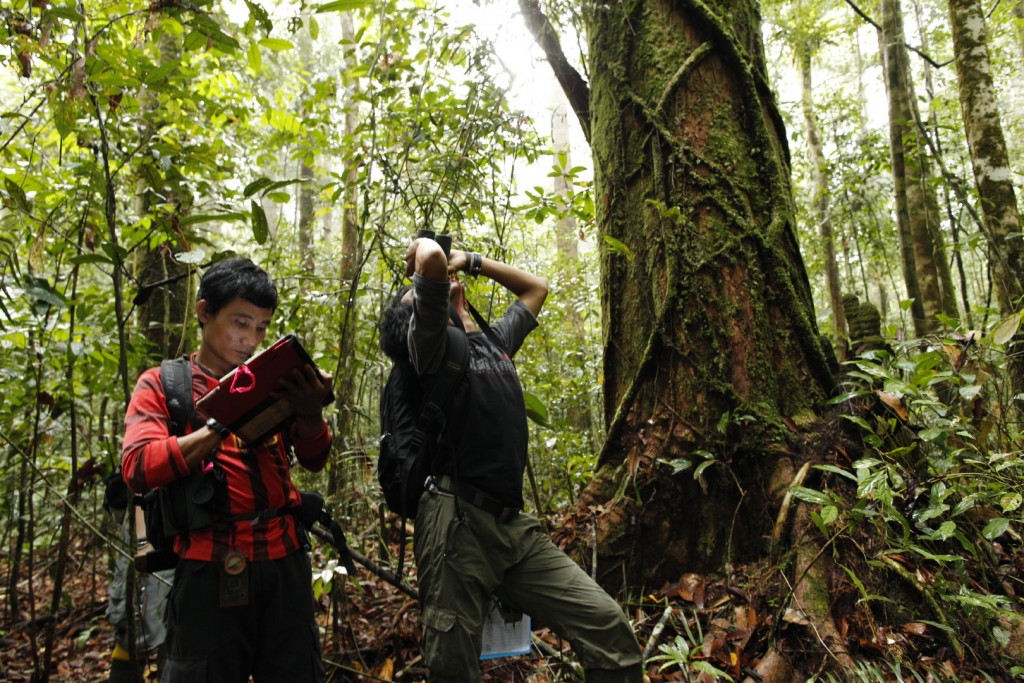 And so began this curious string of events. Walimah initially began trying to drink by sticking her head down the hole. The depth of this tree hole however, was a problem, and on top of that, her huge pregnant belly was getting in the way. After her first try, she tried a second time, this time pulling a vine closer toward her for balance as she hung upside down over the hole. The effort appeared extraordinary. Alas, she seemed unable to reach the water source, so after a third attempt, she used her hands to scoop the water out of the hole, and drip the liquid into her mouth. She did this four times in a row, successfully drinking the water on every occasion. She then removed some leafy debris from the hole, before leaning back in the canopy, and pausing from quenching her thirst. She wasn”t quite finished yet though – she decided to go back in for three more drip drinks, letting the water fall onto her bottom lip, which she stuck out to strategically catch the falling liquid. (Editor”s note: click HERE to watch the event in it”s entirety!) 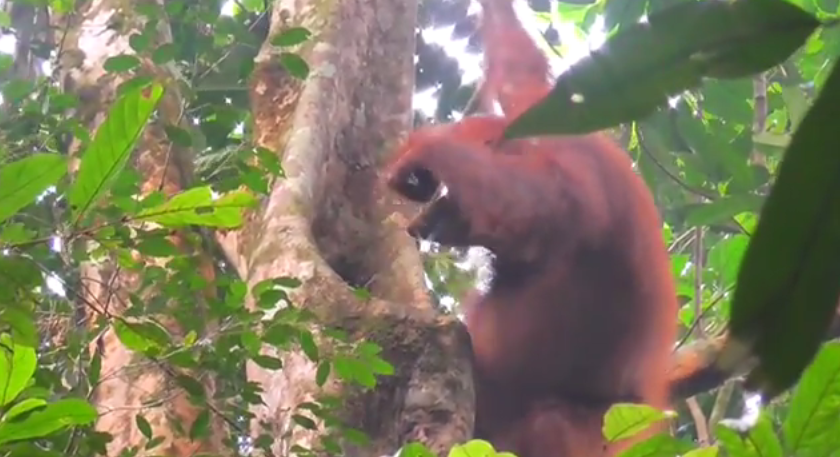 Walimah scoops water from the tree hole and drips it onto her bottom lip. To watch the full video, click HERE!

The aftermath was pure excitement. Toto flicked the camera shut, turned his head and looked me in the eye with a huge smile on his face. As unprofessional as it sounds, we both broke into a celebration dance – this was one of the most impressive and important videos we had ever managed to capture, and we simply couldn”t contain our excitement. Although Walimah is known for her intelligent drinking techniques in Cabang Panti (she has been recorded doing this exact behavior twice before, in 2010) we”ve never been able to document it in such a way. As Toto put it, “This day was one of the most exciting days I”ve experienced since coming to work at Cabang Panti. We follow Walimah a lot and as the day was going slowly, I assumed it would just be another normal follow. Luckily when I am GPS person I always have my camera ready, and this time I managed to film the whole of Walimah”s drinking! It was so cool – I have never seen her, or any other orangutan drinking, and I feel very lucky to have experienced it.” 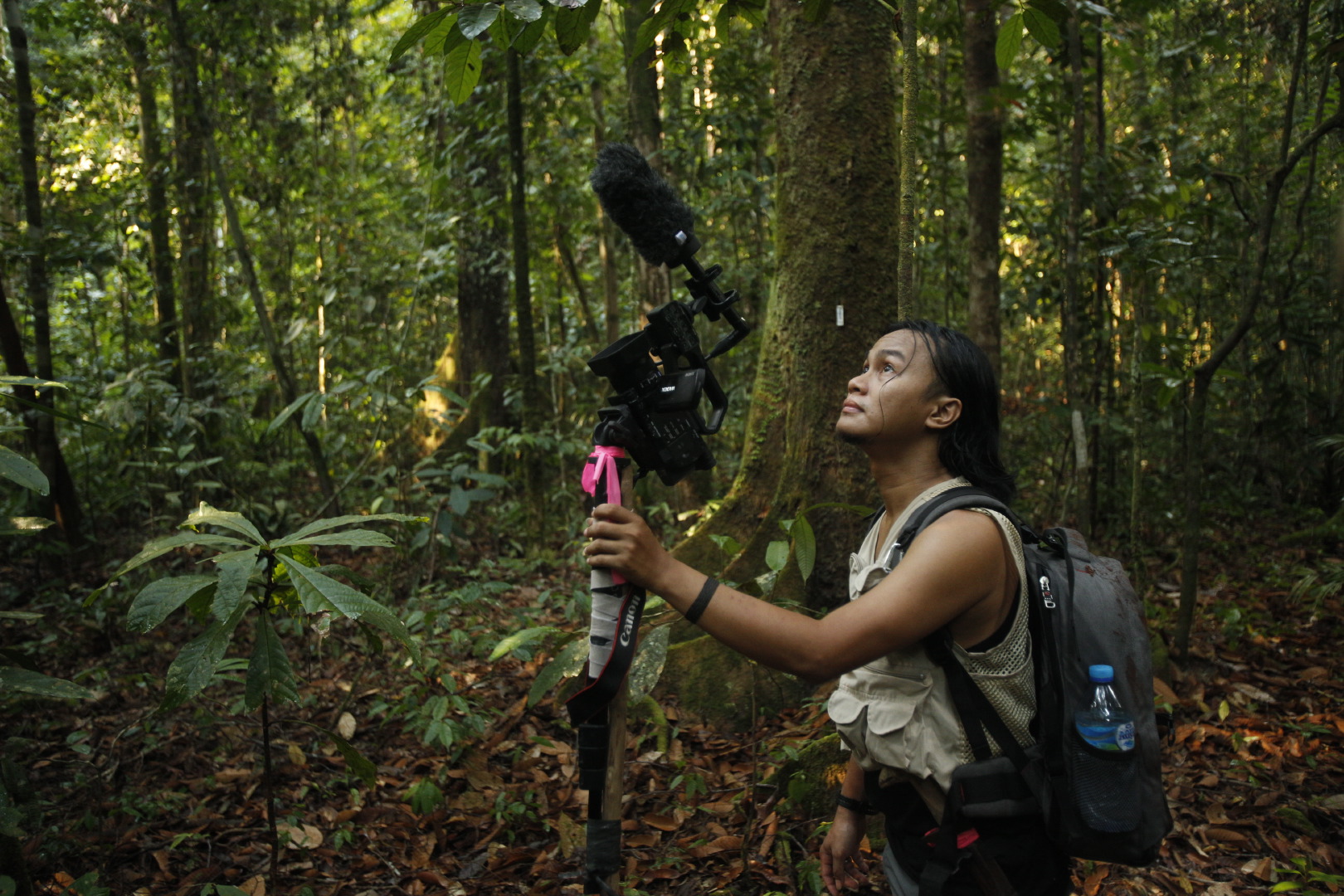 Research Director, Wahyu Susanto, demonstrates use of the stick monopod method for attaching a video camera, as he keeps a lookout for interesting orangutan behaviors to capture on film.

Indeed, orangutans rarely drink water. They seem to be able to get what they need from the liquid that is already contained in the foods they eat. This particular behavior, the “water finger drip” has only been seen eight times, by six individuals in the population of orangutans in Gunung Palung. Of these eight occurrences, four were performed by Walimah alone. Interestingly, all of these occasions were adult females except for one sighting from flanged male orangutan, Codet. We don”t yet know if this behavior represents a cultural “innovation” at Gunung Palung that has spread through social learning, or whether, given the right circumstances, orangutans at many other sites also do this. However, with over 70,000 hours of observations of wild orangutans at Gunung Palung, this is certainly a very rare behavior and we were thrilled to be able to document it on film!