An orangutan who was found trapped in a snare is released back into the wild by our partner, International Animal Rescue

The storage facility of an illegal logging operation

Every year it feels like exactly the same story: the dry season begins, a few hot spots pop up, the dry season continues, and more and more hot spots appear, until it feels like all of Borneo and Sumatra are on fire. The air grows thick with smoke from burning trees and peatland, causing the sun to disappear and forcing everyone to don surgical masks for even the simplest of outside tasks. Schools close and cases of respiratory illness spike, not only in Indonesia, but in Singapore and Malaysia as well. The 2015 fire season has been one of the worst in recent memory, rivaled only by the fires of 1997, during which as many as 13 million hectares of rainforest in Kalimantan and Sumatra were burned. Why does this continue to happen every year, and what are the main drivers of this conservation crisis? 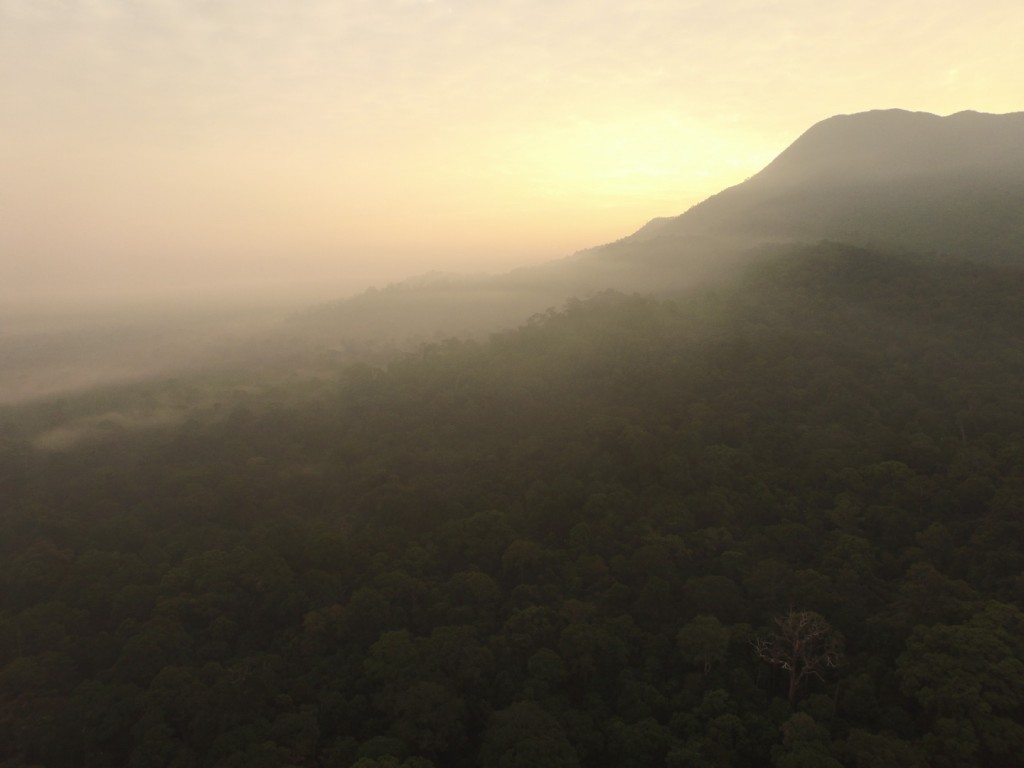 Gunung Palung shrouded in smoke. Since this photo was taken in August, the haze has grown thicker and more persistent.
Photo © Tim Laman.

I had a lot of time to think about this question earlier this month, when I was (somewhat foolishly, perhaps) trying to make my way back from Jakarta to our home base in Ketapang. Transportation from Indonesia”s capital city back to Borneo is usually relatively straightforward: we take a direct flight from Jakarta into the small Ketapang airport, or if that isn”t available, we can fly into Pontianak (the capital of West Kalimantan) and then either take another plane or boat from there. But due to the heavy smoke and low visibility in both cities, all flights in and out were canceled. In fact, on September 17th the API (Air Pollution Index) in Pontianak hit 1,000, which was pretty shocking considering that an index of 150 is normal and anything over 300 is considered unhealthy. After weighing all my travel options, it was pretty clear that my best chance to get back to Ketapang in a reasonable amount of time was to fly to Banjarmasin in South Kalimantan and then travel overland through Central Kalimantan in cars and buses. At that time, South Kalimantan was still relatively smoke-free, but as we drove north into the Central province, conditions changed quickly. The air quality began to deteriorate and the sun faded out. As I looked out the window I began to see small fires along the side of the road, until there was one stretch where all of the bushes and small trees on the left side were engulfed in flames. Thick smoke choked the air and made it impossible to see more than 10 feet in front of the car. The worst part was seeing the peat forest on fire; peat fires aren”t huge, necessarily, but they can smolder for weeks, erupting randomly. Because peat soil is such an excellent carbon sink, during a fire season such as this one carbon emissions can spike drastically. In 1997, the total additional carbon emissions from fires across Indonesia alone was estimated to be 0.81-2.57 gigatons, or 13-40% of a normal year”s worth. 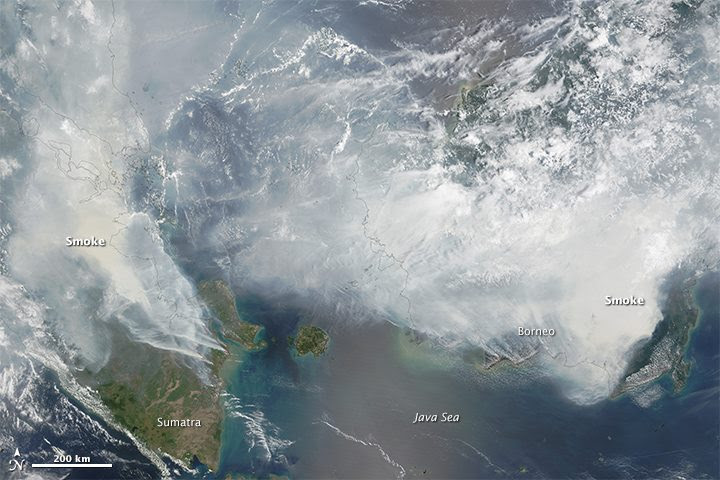 There are two main sources of this yearly fire problem, and ultimately it all comes down to land clearing for agriculture. One culprit is the very large plantations (i.e. oil palm, pulp and paper) that cover much of Kalimantan. Although developing peat forest is against the law in Indonesia, these mega growers have been given permits to do exactly that by local and regional governments. Once peat forests are drained, they essentially become an unlimited source of dry fuel. In addition to that, there is also a significant amount of clearing done by Indonesian small holder and subsistence farmers, who have traditionally used slash-and-burn methods to prepare their land. Under Indonesian law, each person has the right to burn up to two hectares (about five football-field”s worth) of land, and because there is little oversight of these practices at the local level, sometimes the fires set in community farmlands aren”t managed well. If they spread into the peat forests already cleared by plantation companies, the problem is magnified and the fire situation spins completely out of control. These synergies and the lack of organized law enforcement at all levels of government make it difficult to say who is more at fault in this mess, but there is certainly shared culpability between the oil palm plantations, pulp and paper companies, and local people. 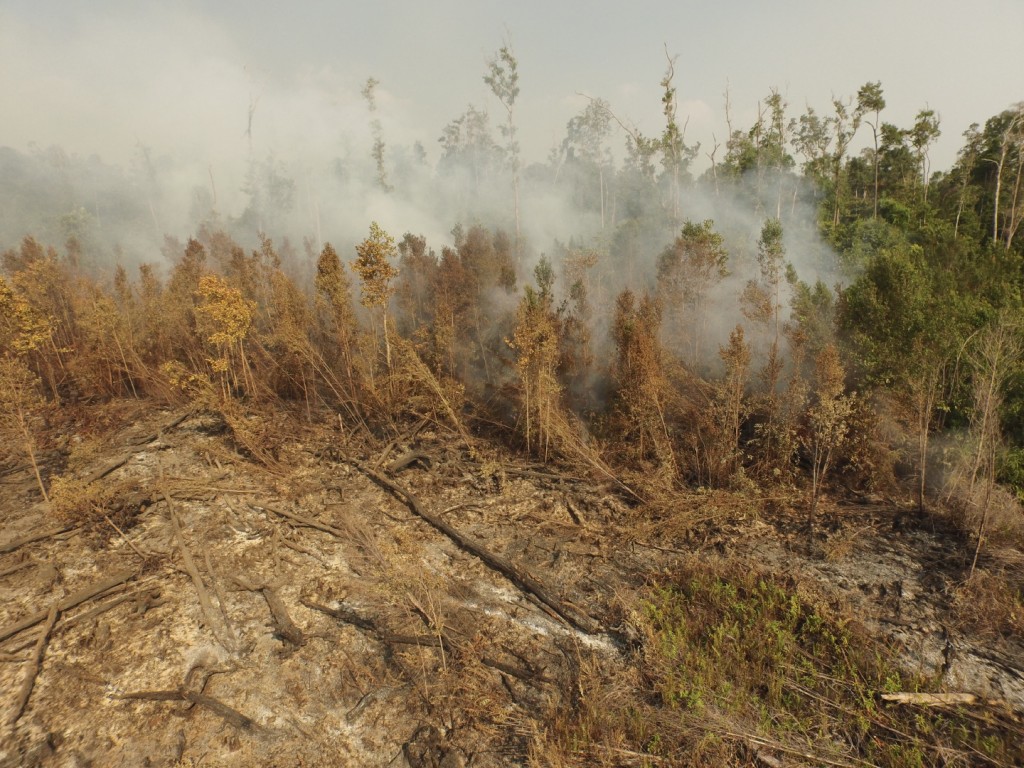 As forests across Borneo and Sumatra burn, so do thousands of hectares of habitat for orangutans and other biodiversity.
Photo © Tim Laman.

These fires can affect wildlife, especially orangutans, in a number of ways. The first and most obvious is, of course, habitat destruction. Every year tens of thousands of hectares of rainforest are decimated. Some animals die in the fires, whereas some are forced out into human-dominated landscapes where they are more susceptible to poaching and hunting. Those that survive are confined to smaller and smaller habitats, until the populations in these forest patches are over carrying capacity (the number of animals that a particular habitat can support, which takes into account food availability and space requirements). This inevitably leads to higher mortality rates than usual. Although this “compression effect” is usually delayed, forest fires can still be considered the direct cause of these animals” deaths. Finally, from my own casual observations from following orangutans and gibbons over the past several years, primate activity can also be negatively affected by the smoke. It seems that orangutans are more sluggish under smoky conditions, waking up later and going to bed earlier, and possibly not taking in as many calories as they should be. The gibbons sing less frequently, and it”s not difficult to see how heavy smoke and poor visibility could hinder their movements. 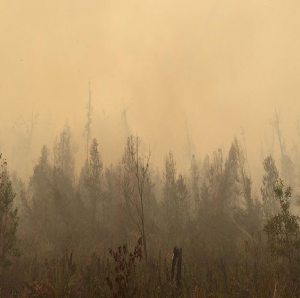 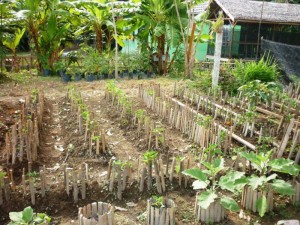 At our Bentangor Environmental Education Center we teach local people how to use sustainable, organic agriculture methods so that they can use the land they already own more efficiently and thus not need to burn more forest to plant crops

So, what is GPOCP doing to help stop Borneo from burning every year? We work with the local government as much as we can to prevent the destruction of peat forests. Because we have been working in the Gunung Palung landscape for over 15 years now, our staff have productive relationships with local officials and we have been able to assist in the district-level spatial planning process. Additionally, our Customary Forest program aims to protect 7,500 hectares of orangutan habitat to the north of the National Park, much of it peat forest. Our Sustainable Livelihoods team teaches local farmers how to use their land more efficiently, decreasing the need for additional slash-and-burn land clearing. And, finally, our Environmental Education and Conservation Awareness staff help disseminate information about the dangers of forest fires and the importance of healthy rainforest habitats to local communities living around Gunung Palung National Park. This year there have been some encouraging efforts by the regional (West Kalimantan) and Indonesian national governments to sanction and arrest large-scale growers and individuals who have broken the law by setting fires in peat forests, and we fully support further action against these offenders.

From watching the outcry against these fires on social media and speaking with people on the ground, I think that this year has been a small turning point in public perception of the forest fire problem, from an issue that has in the past simply been tolerated and forgotten, to the true human rights and environmental crisis that it is. The significance and impact of the 2015 fire season remains to be quantified, but one thing is clear: with strict and serious law enforcement, combined with consistent community education and awareness campaigns, a forest-fire free Indonesia is not an impossible dream.

*To learn more about the drivers and impact of forest fires across Borneo, check out Erik Meijaard”s recent op-ed in the Jakarta Globe. The title of this piece is borrowed from a 2004 article in Nature by Peter Aldhous, also called “Borneo is Burning.”