Over the past 23 years, GPOCP researchers have spent over 70,000 hours studying wild orangutans. No two follows are ever the same, which makes for many exciting moments. In honor of Orangutan Caring Week this year, the current research team wrote up their favorite follow moments to be shared on our Facebook and Instagram pages. In case you missed it, here they are!

Agus Trianto, Botanical Assistant: “In the early morning one day I saw a shadow in the top of a tree moving and it made a sound which I hadn”t heard before. Then I knew it was a long call from Codet, a flanged adult male. It was a little scary at first but really amazing to hear up close for the first time.”

Caitlin O”Connell, Ph.D. Researcher: “On my final day of data collection for my dissertation, I witnessed a social party of 6 orangutans that involved multiple mating events, feeding tolerance, social play, and a major fight between Bilbo and Malik (two unflanged males)! It was the ultimate parting gift from the orangutans of Gunung Palung, emphasizing one of the big take home points from my year observing them – orangutans have far more interesting social lives than we typically give them credit for.”

Wahyu Susanto, Research Director: “In 2009 we were following a mother and juvenile pair named Irma and Ijal, and they ate fruit from a Chaetocarpus castanocarpus tree. We didn”t know that the fruits had very fine thorns on the outside, and that in order to eat them the orangutans had to get rid of the thorns by rubbing the fruit on the tree trunk. We were taking data like usual, but before long all of us felt itchy and painful. We realized that there were many tiny thorns from the fruits stuck in our clothes! Since then we are all more careful when orangutans eat the Chaetocarpus fruit, and sometimes we even have to temporarily take off our shirts so we aren”t itchy all day.”

Andrea DiGiorgio, Ph.D. Researcher: “I was out on a follow with Hassan and Toto and we were following Ned. Ned was kiss squeaking and throwing things at us and I remember at one point Hassan put his hand on a liana and blocked us from going forward. Hassan didn”t say anything but Ned calmed down, and I was really impressed with how he understood the animal we were following and his knowledge of how to work with them and not alter their behavior.”

Kat Scott, Research Manager: “I have had lots of interesting follows, but one of my favorites was when I met this new mother-infant pair in Cabang Panti, and snapped this photo. Finding a new infant is always exciting, and this day was extra special because I was able to spend a few hours just peacefully following them through the forest.” 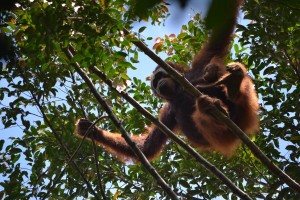 Research Manager Kat found and followed this mother-infant pair as they moved serenely through the trees. Photo by Kat Scott. 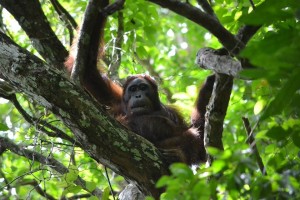 Katie Lauck, Research Assistant: “Pak Bacong (who occasionally helps us in the field) stopped my progress through the jungle with the alarmed whisper, “Ada orangutan!” (There”s an orangutan!). I wheeled around, adrenaline already pumping, and saw an enormous flame-furred flanged male crouched in the underbrush with his back to us. We were still several paces back and the male hadn”t see us, so I turned to Pak Bacong to gesture to get a bit closer. When I looked to my right, though, there was an empty space where Pak Bacong was standing – turns out he”d sprinted right back the way we”d came!”

Tim Laman, GP Researcher and Wildlife Photojournalist: “A forest durian tree was fruiting and I climbed a nearby tree and made a small platform to wait for any orangutans to come and feed. It was a long wait, and I saw several field assistants who just “happened” to pass by come and check the ground for durians to eat (I had a good laugh because they didn”t know I was up in the tree watching them). But finally, the big flanged male came. He saw me in the nearby tree, but didn”t care. He stayed three hours and ate 13 whole durians, including the seeds. I got many photos, including this one.” 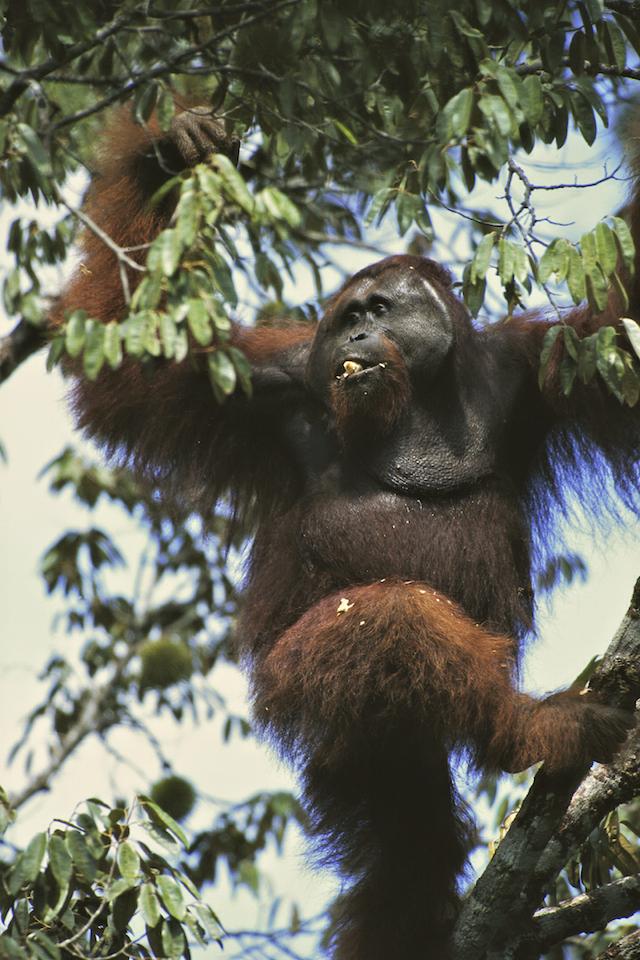 This flanged male probably set a record for the number of durians eaten in one “sitting”! Photo © Tim Laman.