School children hold up copies of our Indonesian-language newsletter, MIaS

GPOCP employees broadcast an episode of a radio program that reaches approximately 400,000 people per month

GPOCP staff and environmental education students pose for a photo

Earlier this month, on November 15th, we held our annual Orangutan Caring Week celebration. This year was a first in that we were in Sandai, a district that directly borders the eastern side of Gunung Palung National Park. Because the trip to Sandai requires a long, five-hour car ride over muddy back roads, the GPOCP Environmental Education team decided to spend all of Orangutan Caring Week visiting schools and community groups in two villages near the National Park. On the last day of Caring Week, known in Bahasa Indonesia as Pekan Peduli Orangutan, we held a “family fun day” at Sandai High School (SMAN 1), in the district”s largest town. Throughout the week, we promoted the theme “Sandai for Orangutan,” to get people excited about taking ownership over orangutan conservation. 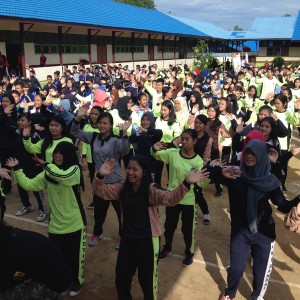 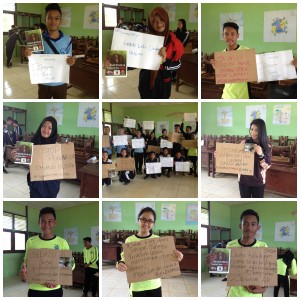 Students from SMAN 1 Sandai share their campaign messages during our #Sandai4Orangutan event.

We opened the morning at 7:00 am with the ever popular Indonesian activity of senam, or group aerobics, set to energizing techno music. This proved a fun way to attract a large crowd of about 400 students and community members, and got them engaged with our activities right away. Two of GPOCP”s educators, Ranti Naruri and Edward Tang, even got up on stage with the instructor! After that, we hosted a puppet show class with a group of local school kids and gave them the chance to perform on stage. Some local musical talent joined in for a few rounds of GPOCP”s original song, “Si Pongo,” and the whole crowd sang along while the students performed with the puppets.

Throughout the morning, we had several stations set up where participants could create their own conservation campaign messages and get their photos taken. Plenty of selfies were taken as well, and we asked people to post their favorite photos to social media using the hashtag #Sandai4Orangutan. The highlight of the day, however, was our tree painting activity, where we asked all of the participants to declare their commitment to orangutan conservation by adding leaves, symbolized by handprints, onto a tree banner that we had created especially for Orangutan Caring Week. The banner was donated to SMAN 1, where it will become a permanent display. 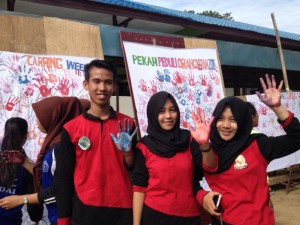 Students proudly show off their hands after adding their prints to our Orangutan Caring Week tree banner. 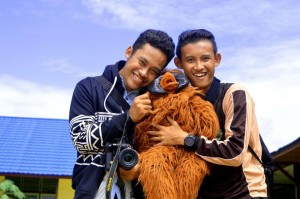 All of us at GPOCP were thrilled with the huge number of people who came out to celebrate Orangutan Caring Week, and although it had been a busy week full of school visits, film showings, and community meetings, we were re-energized by the crowd”s enthusiasm. The local schools, especially SMAN 1, were very hospitable and receptive to our conservation work. The high school principal, Mr. Dian Natalis, was especially happy because, “the Orangutan Caring Week activities increased our students” knowledge and awareness about the status of protected animals, like the orangutan, and our environment.” He continued by saying that he plans to host an activity like ours every year from now on! The students agreed with his statements, adding that the day was exciting, and something that they”d never experienced before. They especially enjoyed learning new things about orangutans and having the opportunity get involved by creating their own campaign messages.

It”s safe to say that this year”s Orangutan Caring Week was a success, and we can”t wait to do it again next year!