December was the first month of a new capacity-building initiative for GPOCP. Each staff on the conservation team will now have the opportunity to spend one week at Cabang Panti Research Station, so that we can learn more about orangutans, the forest, and the research project. This will help us become more effective conservationists, and the occasional week spent in the rainforest also keeps work fresh and renews our motivation. So, from December 9-15th, I was able to visit Cabang Panti and become a researcher for a week! Because I have never followed orangutans before, I spent most of my time observing the research assistants to learn the techniques. I was also very interested in what the orangutans were eating, and collecting food samples became one of my main projects. 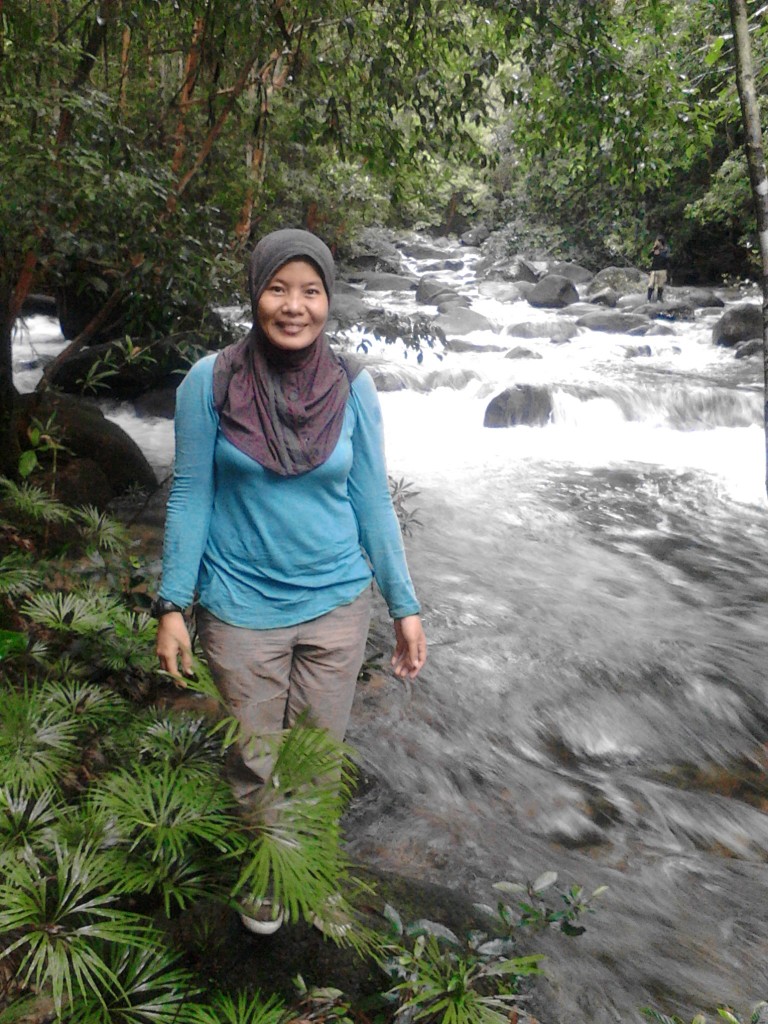 Mayi’s first trip to Cabang Panti was a great success! This program will provide excellent capacity building and field experience for our conservation staff.

Day 1: Thursday, Dec. 10
Research Manager, Kat Scott, and I searched for orangutans close to camp. We found Jumi, an adult female, eating from a Santiria tree. There were also two hornbills feeding in the same tree. We decided to search for other orangutans so that I could learn the trail system, but unfortunately didn’t find any more – only two macaques, two red langurs, and three orangutan nests. Eventually, we called it a day, because the previous night it had poured down rain and camp had flooded, so we needed some rest! I was impressed by how sensitive Kat was to all of the movements and sounds in the forest and how she knew exactly where the animals were. She explained that if I could spend an entire month at camp, I would get much better at understanding not just if there are animals around, but also how to discern between the species. The sounds of orangutans in the forest, for example, are much louder and localized than the sounds that gibbons make, which sound more like quick splashes in the trees.
Day 2: Friday, Dec. 11
I went into the forest with Toto and Akau, two of the orangutan research assistants. Our objective was to search for orangutans, and then if we found one, follow until he or she made a night nest. Because it had rained all night and into the morning, we left from camp at about 11:20 am, which was unusually late. Luckily, at about 12:05 pm we discovered an unidentified juvenile orangutan! She was eating Chaetocarpus fruits, which are covered in itchy hairs. Her feeding behavior was very interesting; she would rub the fruits on the back of her hand to get rid of the irritatants before eating. After about an hour she moved on to a durian tree. After visiting several more trees in search of fruit, she decided to make a nest at about 6:00 pm. It was already dark, and the river, which had been easy to cross in the afternoon light, was now full with runoff from the previous morning’s storm and moving quickly. With Akau’s help, I was finally able to get across, and after about an hour’s walk we arrived back at camp. When I got back, I sorted all of my samples and photos, so that I could identify the trees again later if I saw them in the forest. In just the six hours that we followed her, the orangutan had eaten nine different species! 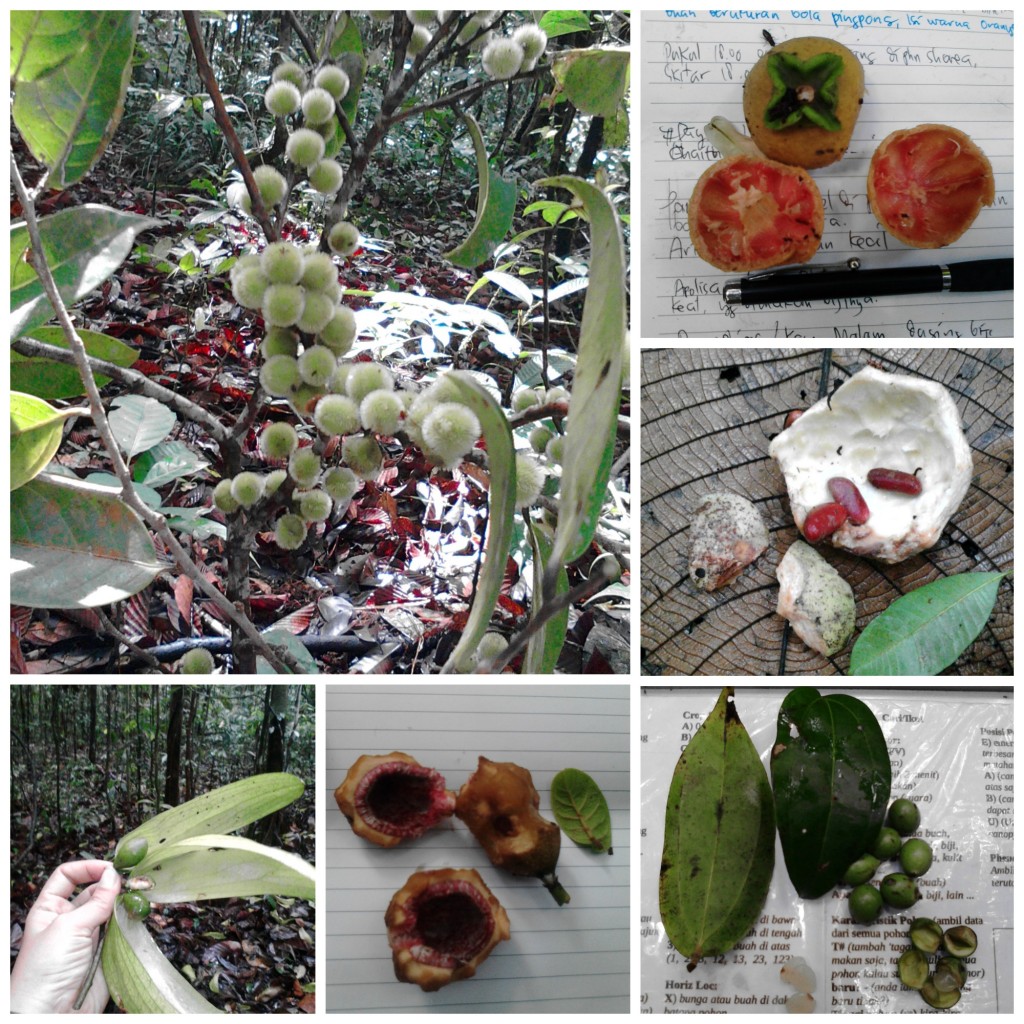 Day 3: Saturday, Dec. 12
Although I wanted to have the experience of following an orangutan from the morning nest, I decided that I wasn’t quite capable of waking up at 3:00 am and spending the entire day in the forest. I’m not a professional yet! So, I went out with Botanical Assistant, Agus, after lunch. Toto and Akau had been in the jungle since 4:00, and had already scarfed down their lunchboxes by the time we arrived. Toto explained that, while he likes doing orangutan research, it can be incredibly tiring. If the orangutan makes a night nest far from camp, the researchers have to leave as early as 2:00 in the morning to be there before the animal wakes up. The long days and short nights can be difficult to handle. Because Agus and I had already arrived, Akau went back to camp because he was feeling sick, and it wasn’t long before Kat arrived to help out.
The orangutan that we followed that day, the same juvenile female from the day before, moved quickly and switched feeding trees many times. She took us up and down the mountain, and there were several times when we had to run to keep up with her. Because of that, we gave her the nickname “Ghost.” She ate from seven different trees over the next couple of hours, until we lost her because it started raining hard. Although orangutans are large animals, and can be very loud in the trees, they can also move super quietly when they see an opportunity to escape. I was bummed that we lost her, because we already had almost a full day of data. We searched for another hour, but didn’t find her, and were forced to go back to camp disappointed. Our day was truly full of highs and lows, in more ways than one. 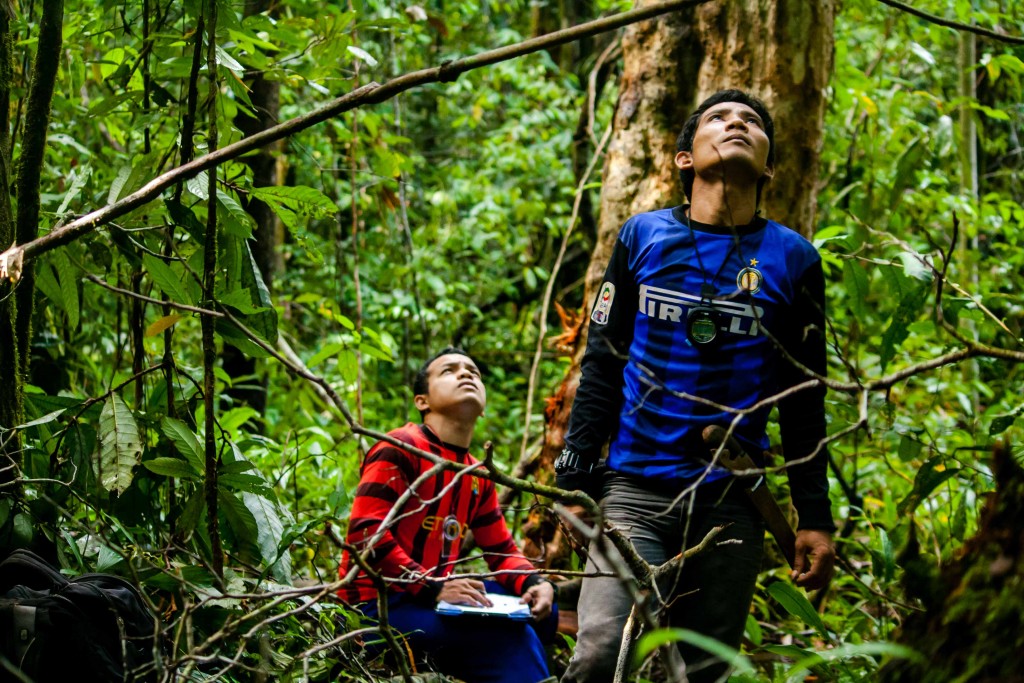 Research assistants Toto and Yadi on a full-day orangutan follow.

Day 4: Sunday, December 13
Today I decided to help Katie, who planned to climb trees to collect extra fruit and Pandanus epiphyte samples for Boston University graduate student Andrea DiGiorgio’s data. We left camp at about 9:00 am. When we got to the first tree, we discovered that an orangutan had very recently eaten there, and after we collected all of the half-eaten fruit under the tree, Katie decided that we didn’t need any more. The tree which hosted the Pandanus plant was a different story, though! Katie examined the tree and taught me the basics of climbing, and then we walked back to camp for lunch. The trail back to camp was pretty far, and I thought it wasn’t worth it to go back just to eat, but Katie needed to collect more equipment to climb that afternoon. We returned together at about 2:00 pm, and it took another hour to collect enough pandan leaves to complete the sample. Unfortunately, I couldn’t try my hand at climbing, because it had started raining, but I was able to help by making sure everything was safe on the ground, and took photos to document her work. 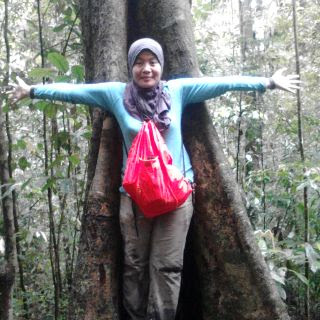 Mayi will use the knowledge she gained at Cabang Panti to enrich our Environmental Education program.

On my last day at camp, I took a break from the orangutans to follow the red langur and gibbon project research assistants, who also work at Cabang Panti, on one of their monthly phenology routes. Zakaria, Surya, and I left camp at about 7:00 am. We split into two teams, and Zakaria and I climbed the mountain for about two hours to reach our assigned trail. The goal of the phenology project is to better understand the patterns of forest productivity, and data collection involves counting the number of new leaves, flowers, and fruits within the phenology tree plots. This information is useful not just for learning about rainforest ecology, but also to guide the teams when they search for primates. Knowing which trees are currently fruiting makes it much easier to seek out the orangutans, gibbons, and red langurs in the forest. I tried to help take data, but it was so challenging to discern between old leaves, new leaves, flowers, and fruit through the binoculars! Zakaria told me that it takes a few months of practice, and lots of patience, to learn how to collect the phenology data. It took us about three hours to finish taking data, and then we returned to camp for the day.
Overall, I really enjoyed my time at Cabang Panti. Although the research and conservation teams are all part of the same organization, we don’t often get a chance to spend time together, and this experience was very beneficial for all of us! I now feel more motivated in my work, and will integrate everything I learned about orangutan behavior into my environmental education presentations and field trips. Hopefully next year I will get to visit the research station again, see more orangutans, and learn even more about the rainforest of Gunung Palung.