No, it’s not the beginning of a joke! In Bahasa Indonesia, the word “ekor”, meaning tail, is used to describe the number of animals in a group. At our conservation activities, though, GPOCP staff use the word “individu” (individual) when they talk about orangutans. Although it’s a small difference in terminology, we feel that this difference is a useful entry point to teaching people about orangutans and great apes in general. With this in mind, last week GPOCP’s staff journalist, Pit, published the following article in the local Indonesian media. We have added a couple of sentences on the end to tie this in to a larger discussion surrounding great apes. While the philosophical conversation about great ape “personhood” is outside the scope of our environmental education and conservation awareness work in Indonesia, Pit’s article promoting the explicit use of individual for orangutans in Bahasa Indonesia (translated below) certainly hints at this issue. 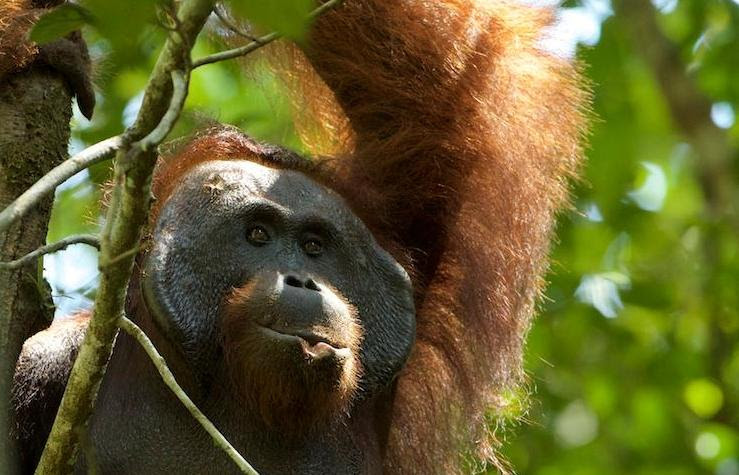 Some people believe that terminology is not important, but in conservation, the words we use often convey our values. Photo © Tim Laman.

Often I hear people refer to orangutans with the word ekor. For example, they say “We saw one ekor orangutan near the village yesterday.” Grammatically this is correct for animals. But, is there a better word to use for orangutans?

Before we talk about that issue, let’s learn more about this primate. Orangutans are rare animals, only found in Borneo and Sumatra. There are many things about orangutans that are interesting and unique. One of the most amazing things about orangutans is that they are what conservationists call an “umbrella species,” meaning their extinction will signify the loss of hundreds of other plant and animal species in the rainforest. Or, more positively, by protecting orangutans we can conserve all of these forest species, from the smallest insect to the largest bird and other primates.
Orangutans hold an important role in the ecosystem as seed dispersers, speeding forest regeneration through the fruits and seeds they eat. The existence of primary rainforest, their preferred habitat, not only supports communities that depend on it for ecosystem services, but is also the key to a healthy planet. And, rainforests need biodiversity. Saving orangutans also helps all of the other mammals, birds, reptiles, amphibians, insects, and plants that live in Indonesian rainforests.
Now, let’s come back to the discussion about what word is best to describe orangutans. The conservation world has already agreed that orangutans are individuals (as opposed to ekor). One reason for this is that orangutans are solitary, living alone instead of in groups. Another explanation is that orangutans really don’t have tails! Bornean orangutans are one of the world’s five species of great ape, with the others being Sumatran orangutans, gorillas, chimpanzees, and bonobos. Gibbons, which also don’t have tails, are classified as lesser apes. Primates with tails are called monkeys. Those that most of us are familiar with include red langurs, macaques, and proboscis monkeys. For these reasons, the term ekor is misleading, and we at GPOCP always refer to orangutans as individuals.
The “ekor or individual” question gets at a bigger question surrounding great apes: how human are they? Or, in what ways are we alike? We know that orangutans share 96.4% of our DNA, and that humans and chimpanzees are 98.8% alike. Great apes have their own cultures, can learn sign language, and have been observed using tools in the wild. So, where is the line between human and ape? We don’t have all the answers, but we agree with Pit: clearly orangutans and other great apes should be described as more than just an “ekor”.