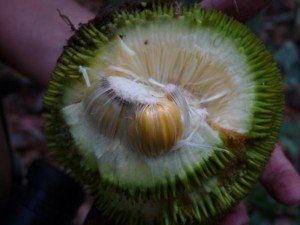 Artocarpus fruits vary in size, shape and texture and are a preferred fruit of orangutans. Some species are commonly eaten by humans as well.

This story begins with Codet (as so many of my field stories do). April had brought rain showers and little else. Nothing in the forest was fruiting, so it seemed that most of the orangutans were resting somewhere out of our reach. We had only been following Bilbo, an unflanged male, whom we could keep hold of for just a few days. Bilbo”s presence, however, had coaxed Codet out of hiding, as he was in the same area and long-calling like crazy, presumably in order to get this “intruder” to move on. Bilbo hastily left the boundaries of Cabang Panti research site, and I located Codet from his incessant calling and loud crashing through the trees. It had been a long day and I decided to let Codet go, knowing that, as long as he kept long-calling, he could be easily relocated the next day. How wrong was I! Codet went silent and disappeared, and our team was unable to locate him again.

A few weeks later, we found Codet in exactly the same area, eating in a large Artocarpus tree. Jumi, an adult female, was in sight but reluctantly hanging out on the side lines until Codet finished and she could make a move. This tree appeared to be the only one fruiting in the vicinity and over the next few days we realized it was a magnet for orangutans in the surrounding area. During our first day of following Codet, he moved away from the tree to make a nest and take a nap, with Jumi immediately moving in after him to take her position in the Artocarpus. The afternoon was rather low-key, until we heard a noise close by. Codet jumped straight out of his nest and kiss-squeaked, indicating he was about to long call (this is one of his stranger traits!). Then he came low to the ground and grumbled right in the direction of a new intruder. Several of us chased after the running animal to find out who or what it was. A kiss-squeaking in the trees directly above stopped us in our tracks and we realized that the newcomers were an adult female orangutan and her infant. She was obviously very shaken by Codet”s threatening behavior and hid from him in the trees. Codet, who was clearly perturbed by someone trying to invade his food source, stayed near the ground before swinging upwards and moving back into the Artocarpus, displacing Jumi, who skulked off to a nearby tree and made herself a leaf pillow while she waited.

The new female and her infant made their way back to the Artocarpus and managed to sneak into the fruiting tree right under Codet”s nose. Jumi quickly followed suit. For the next hour, everyone tolerated each other”s presence and all that could be heard above was the chomping of three (and a half) relatively satiated orangutans. Soon, they sky began to darken, and everyone took off in different directions to make their nests for the night. Suddenly, Codet swung around and long-called at the mother-infant pair again. She quickly fled the scene, nesting near the Artocarpus tree but out-of-reach of Codet. Jumi sat and watched this play out before bundling branches and leaves to construct her bed for the night. 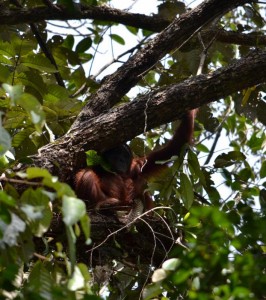 Jumi rests her head on a leaf pillow while waiting for Codet to finish eating from the Artocarpus tree. Photo: Kat Scott 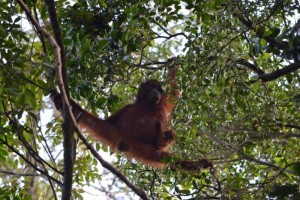 Bibi, and her new infant, join in the Artocarpus feeding frenzy.

What followed for the next few days was more of the same. Each morning before light, Jumi and Codet were in the Artocarpus eating and generally tolerating one another”s presence. They have often been seen in consort before, but this was my first time meeting them together. On one of the follow days, Jumi displaced another mother-infant, displaying a lot of aggression, and eventually Codet left. Once Codet had gone, this opened the gates for two unflanged males, Bilbo and Bosman, who ate in the tree under the watchful eye of Jumi, who apparently had appointed herself gate-keeper to the only fruit source around. The original mother-newborn pair turned out to be Bibi, an orangutan who has been followed in Cabang Panti for many years, with her new baby. Bibi”s adolescent daughter, Berani, arrived a few days later to join in the fight for Artocarpus fruits.

After several days in the same area, our focal animals moved from the tree, but we know it was frequented by gibbons, red langurs and many more orangutans after we left. The behavior we witnessed over these few days is interesting for two reasons. For a start, multiple orangutans co-feeding is something that we have witnessed to varying degrees over the years, but we rarely see so many orangutans fighting over a single food source. The other interesting thing was that, when they were intolerant toward each other, these orangutans were really not that aggressive, as opposed to behavior one might observe in some other primate species. The reappearance of some orangutans we have not seen for a while, such as Jumi and Bibi was also very exciting, as we still don”t know where they go when not inside the boundaries of the research site. The story of the battle of the Artocarpus just goes to show how you never know when a normal day in the forest will turn extraordinary – that”s part of the magic of Gunung Palung!