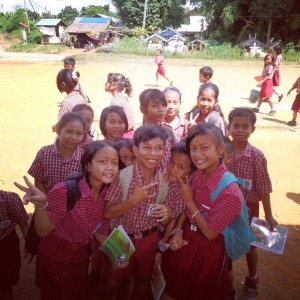 One exciting new development in our conservation program this year is the addition of “Environmental Education Expeditions” to our repertoire of activities. These expeditions are designed to target remote communities around Gunung Palung National Park that also have relatively high rates of wildlife crime, and are part of our efforts to target audiences that we have never before reached through our Environmental Education program. Last month, GPOCP”s Environmental Education team went on an expedition to Nanga Tayap county in Ketapang regency, more specifically two villages called Batu Mas and Kayong Utara. These villages lie on the south-eastern side of GPNP. The expedition lasted for about five days, during which time our team held eight activities: two orangutan-themed puppet shows in elementary schools, two in-class lectures about orangutan behavior and ecology in junior high schools, two community discussions with local adults, and two evenings of mobile cinema, during which we showed conservation-themed films. Our main goal was to encourage people to care about the biodiversity of Gunung Palung, especially orangutans, and to teach them about the importance of intact rainforests.

The experiences in each village were very different from each other. Batu Mas village used to be close to the forest, but now is quite far away because there are two oil palm plantation companies in the vicinity, P.T. BGA and P.T. LHP. The students who attended our activities in this village do not know much about wildlife and none of them had ever seen an orangutan. The adults in the communities also said that nowadays they rarely see orangutans in the surrounding area. They told us that they really missed the forest, because they no longer have a natural source of fruits and vegetables and the weather in the village feels much hotter and drier.

Kayong Utara village, on the other hand, is located in the middle of intact forest. This Dyak village is one of the more isolated villages in Ketapang district, and they are too remote to be on the region”s electric grid, so every night from 6-10 pm the entire community gets their electricity from the village”s generator. This power system is largely independently financed by residents, with donations of diesel fuel from a nearby logging company (P.T. SJM). The village also borders P.T. BGA, the same palm oil company from Batu Mas. All things considered, the forest in this village is still in good condition. One local livelihood is harvesting honey from the hives of honey bees that inhabit the forest, which is a sustainable source of income that doesn”t harm the environment. Here we found that the students” knowledge about orangutans was better than in Batu Mas.

However, we also discovered that about 20% of the students had eaten orangutan in the past, which indicates that there has been orangutan hunting in the past 10 years. I was glad that we came to this village, because we were able to discuss with these students why orangutans should not be eaten and how important they are to the rainforest ecosystem. 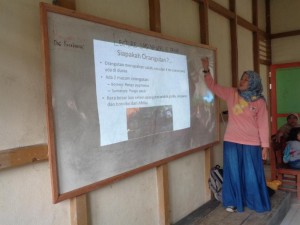 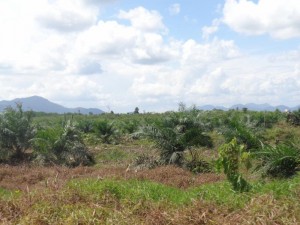 A smallholder oil palm farm near Batu Mas. This is likely owned by a local community member, but the landscape in the area is dominated by two large plantations, so oil palm is a common sight here.

During this activity, our Environmental Education team was able to reach over 400 people. We were very impressed by the local village leaders, who were both very engaged with our work and even attended our school visits! Hopefully by building relationships with them, we will be able to influence orangutan conservation in Nanga Tayap. The expedition was very tiring – the condition of the roads was quite poor in many places, with enormous potholes from oil palm trucks that made the drive uncomfortable. However, we had a great time, meeting new friends and interacting with the students to teach them about orangutans. One of the recent Bornean Orangutan Caring Scholarship recipients, Deri Irawan, joined us on the expedition, and we were very thankful for his assistance. He hasn”t even entered university yet, but is well on his way to becoming a community conservation leader! Although the expedition was challenging, we are already looking forward to the next one in August, and to continuing to use this educational strategy in the future.
Thank you to Orangutan Outreach and Riverbanks Zoo and Gardens, who have generously contributed to GPOCP”s Environmental Education Expeditions.