As one of the longest-running orangutan conservation organizations in West Kalimantan, GPOCP is often invited to government and private-led meetings and workshops intended to help strengthen conservation action. This month our Research Director, Wahyu Susanto, attended the Orangutan Regional Meeting in the provincial capital of Pontianak. This is a routine part of Indonesia”s 10-year Orangutan Action Plan, which was initiated in 2007. 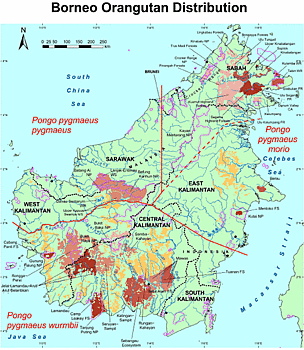 Distribution of the three subspecies of orangutans across Borneo. West Kalimantan is home to two subspecies, Pongo pygmaeus wurmbii and P. p. pygmeaus. Map from Ancrenaz & Lackman-Ancrenaz (2004), and Meijaard & Dennis (2003).

In preparation for the Population and Habitat Viability Assessment (PHVA) meeting later this year, the West Kalimantan Department of Natural Resources Conservation (BKSDA), in collaboration with FORINA (the Indonesian Orangutan Forum) and WWF-Indonesia, held the province”s Orangutan Regional Meeting on the 15th-16th of this month. There were representatives from a variety of conservation groups in attendance, including the relevant local government agencies, NGOs, and private companies (i.e. oil palm and pulpwood plantations) that own large swaths of land in West Kalimantan.

The purpose of this meeting was to compile and examine the data on population estimates, habitat distribution, threats, and habitat and population viability of both orangutan subspecies in West Kalimantan (Pongo pygmaeus pygmaeus and Pongo pygmaeus wurmbii). Aside from that, we also evaluated the implementation of conservation strategies and action plans for orangutan conservation in West Kalimantan. All of the relevant stakeholders from across West Kalimantan were in attendance, which is a rare occasion. We also took advantage of this opportunity to synergize our work plans, to maximize our collective impact on orangutan conservation.

On the first day, the participants were divided into two groups based on the subspecies present in their region. The orangutans in the Gunung Palung landscape are of the Southern/Central subspecies, Pongo pygmaeus wurmbii. West Kalimantan also has a population of the Northwest Bornean orangutan, Pongo pygmaeus pygmaeus, which can mainly be found in the region bordering Sarawak (Malaysian Borneo). At the plenary session, the two groups were asked to provide current information on orangutan conservation in their working area, such as the population size, critical habitats, threats to orangutans and their habitat, and to highlight good strategies for orangutan and rainforest conservation in their project areas.

The second day focused on a number of presentations about efforts to safe-guard orangutans in protected areas, districts, and regions across West Kalimantan by the NGOs and private companies that are involved in conservation work. From the ten or so NGOs in attendance, only GPOCP and WWF were asked to give a presentation. The meeting”s participants were quite excited about GPOCP”s activities because our approach, which includes research, conservation awareness campaigns, community development, alternative livelihoods, environmental education and the Bornean Orangutan Caring Scholarship is unique among the orangutan conservation NGOs in West Kalimantan. We received very positive feedback from the other organizations in attendance. 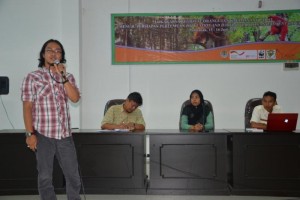 The Orangutan Regional Meeting represents an important effort to know the status of orangutans in West Kalimantan. The results of this meeting, including updated information on the distribution, population size, threats, and conservation efforts, both in-situ and ex-situ, will be submitted to the Government of Indonesia. These data, in addition to the information gathered at the other regional meetings across Kalimantan and Sumatra, will become the baseline data that will be used by the government to renew Indonesia”s National Strategy and Action Plan for the conservation of orangutans, which is up for renewal in 2017. GPOCP”s work in Ketapang and Kayong Utara regencies, along with the efforts of the dozens of other organizations across Indonesia working to protect orangutans, is integral to ensuring a future for these amazing great apes, and we are happy to collaborate with the Indonesian government to promote their conservation.